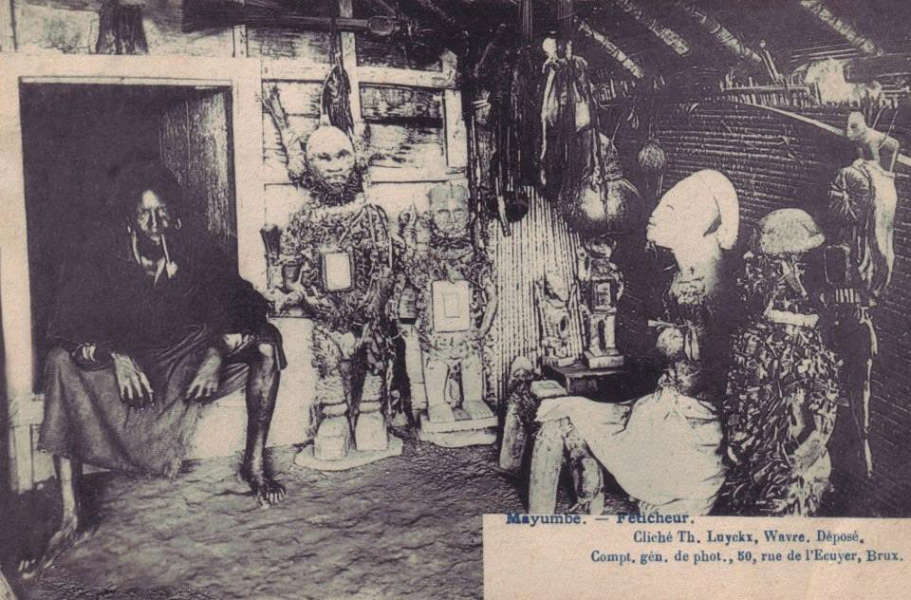 Above a fantastic old postcard, previously unknown to me, showing a collector of African art specialized in Kongo nkisi nkondi smoking a pipe in his living room. 🙂 I count four big statues, two smaller in the corner and a dog on the ground in front of them. On the right, there also appears to be hanging a zoomporphic figure on the wall. I have never see so many figures together owned by a single diviner. This picture somehow reminded me of Dennett’s drawing of a Vili diviner at work, as illustrated in his Seven years among the Fjort and shown below. 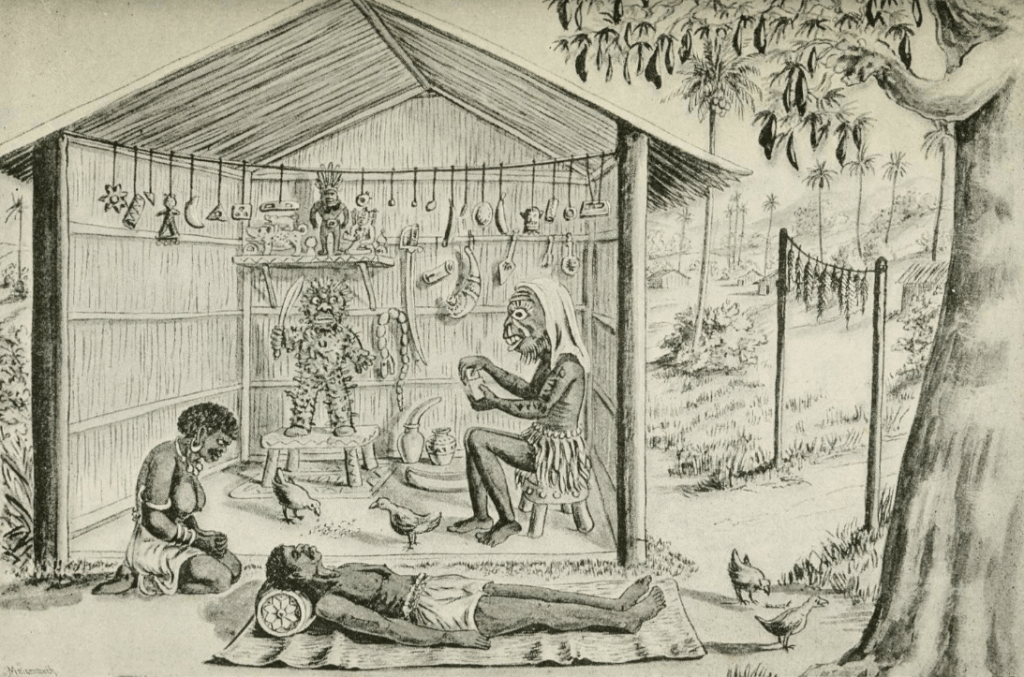 After a short holiday in Portugal, I’m back at my office. I wanted to visit the Museu de Ethnologia in Lissabon but learned the storage room with African art unfortunately isn’t visitable. In the meantime, the world did not stop turning; some African art related news stories below: 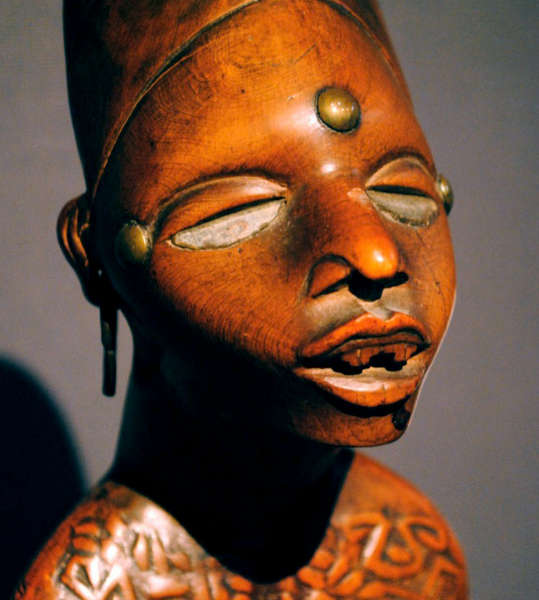 Christie’s sale of the Rudolf & Leonore Blum collection last week did very well. The sale made € 2,978,200 (excl. premium), just above the total high estimate of € 2,919,000. Single owner auctions always tend to perform better than various owners sales. 56 (or 89 %) of the 63 lots were sold. But, important to remark, about half of those objects were sold under their low estimate. The reserves were very low so the heirs must have been keen not to have any objects back. The bidding for an excellent bronze Yoruba bell from the Ortiz collection for example started at only € 2,000 – while it was estimated € 15,000-20,000 – and a lucky bidder could buy it for € 3,800. A Mangbetu box, estimated € 12,000-18,000 sold for € 3,200 (excl. premium). The only reason why 7 lots remained unsold is because nobody bid on them, even at a very low reserve (€ 2,000 for the excellent Yoruba mask, lot 29, for example); otherwise this would have been a sold out sale. What I did enjoy to see was that some lots, while starting very low, like the enigmatic Cameroon figure (lot 38) at € 20,000, did sell within or just above their estimate (€ 72,000 without costs with an estimate of € 50,000-70,000 in this case). This shows that buyers — or their advisers — these days do their homework scrupulously and no matter what the starting price is, a piece is sold at its value.

What made this sale, was a small group of high quality objects. About 25 % of the lots were sold above the asking price. A Bamana mask (est. € 60,000-80,000) from a known hand sold for € 210,000 (excl. premium) to a telephone bidder. The Senufo maternity figure (lot 11) doubled its low estimate and sold for € 440,000 (excl. premium). One of the biggest surprises of the sale was the Benin aquamanile in the shape of a leopard (lot 26) which sold for six times it high estimate at € 420,000 (excl. premium). Another surprise was a Mangbetu drum (lot 48) which sold € 100,000 above its high estimate at € 135,000 (excl. premium) – 1875 being an extremely early collection date for such an object. The cover lot, a Luba-Shankadi headrest (lot 58) sold for € 550,000 (excl. premium); I had expected that it would sell for more. The star of the sale for me was the Yombe maternity figure (lot 49), a steal for € 65,000 (excl. premium). Its masterly carved scarifications and charismatic head with beautifully rendered facial traits for me make it one of the best examples of its kind. Curiously enough, the child in the mother’s lap appears to be grasping his own right foot; one can only wonder what that originally meant.

Christie’s various owners auction that followed the Blum sale was not as successful. The total sale made € 1,268,800 (excl. premium), with a total low and high estimate of € 1,159,800 – € 1,698,000. The reserves being much closer to the low estimate, about half of the 66 African art lots remained unsold. Of the 34 sold lots, 12 ended under the low estimate, 11 between the low and high estimate, and 11 above the asking price – very well balanced thus. Paul Guillaume’s Dan mask, sold for ten times its high estimate at € 600,000 (excl. costs). An old metal label on the Inagaki base on the back (which used to hang on the front) stated this mask was from the 5th century (see the picture below). Surely, it wasn’t that old, but it dated certainly from the mid 19th century – which is ancient for a Dan mask. It’s incredible result shows that prices continue to reflect not only the intrinsic value of objects, but the quality of their history as well. An object that missed such an illustrious provenance and publication history, the Fang monkey featured on the catalogue’s front cover, thus not suprisingly stayed under its low estimate of € 80,000 and was hammered down at € 65,000 (excl. costs). Another important lot, the Punu mask (estimated € 180,000-200,000) was sold for € 120,000 (excl. premium). A Songye kifwebe mask (lot 200) (est. € 50,000-80,000) sold for € 140,000, while an Hemba ancestor figure (lot 201), published by François Neyt and estimated € 150,000-250,000 failed to sell. This sale again illustrates how selective buyers are these days. The Dan mask alone was responsible for almost half of the total result. In my view one can say a lot on the current state of the market for African art, but one thing one can not say is that it is growing. 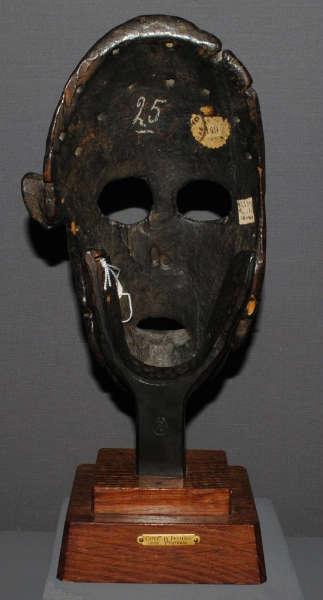 A wonderful drawing by Iba Ndiaye which I just discovered in the online presentation of the collection of the High Museum of Art in Atlanta (here).

Included in this small sketchbook is a drawing of a nineteenth-century Kongo sculpture from the Yombe region of central Africa, in the collection of the National Museum of African Art, Smithsonian (see below). This drawing was made during the artist’s 1993 visit to Washington, D.C., where he made sketches and notes on numerous artworks ranging from ancient Minoan sculpture to works by Titian, Bellini, Van Dyck, Bacon, and de Kooning. All together, this small, 100 page notebook, originally purchased in the shop at the National Gallery (as evidenced by the dated receipt contained within) includes sixty-five sketches and notes.