Prof. Christopher D. Roy and Dr. Catherine Hale recently announced the launch of the Art & Life in Africa website. Hosted by the University of Iowa Museum of Art (UIMA), it is a freely accessible educational resource which is the product of the collaborative efforts of more than fifty scholars, technicians, collectors and institutions around the world. You can find it here.

The website converted content from a now-outdated, but once critically acclaimed CD-ROM. Roy created the Art and Life in Africa CD-ROM in 1997 as a tool for educators and scholars. It brought together media and scholarly material including photographs, essays, maps and videos. Roy didn’t want the CD’s content to be lost in the Internet-era and all of the original participants were invited to evaluate their previous contributions and make modifications or submit new content for this online edition. Some additional info:

The conceptual structure of the CD-ROM, which continues to inform its current online presentation, was based on Prof. Roy’s reading of Arnold van Gennep’s publications about passages of life in Africa. This format draws on the Congo Cosmogram of a circle with a cross, with the sun rising in the East and traveling counterclockwise to its apex at noon or adulthood, and declining in the West at sunset or death, and then continuing through the underworld until it is reborn in the East as a new day. Inspired by the Cosmogram, Prof. Roy and his colleagues wrote individual chapters to create an overarching narrative, which included such topics as Key Moments In Life, Education/Initiation, and Sacred Spaces. These chapters are supplemented further by more focused topic essays written by scholars in their fields of expertise.

The CD-ROM, completed in 1997, sold thousands of copies to public school systems, public libraries, and universities in North America and abroad. It received critical praise for contributing substantially to the understanding of Africa by students, scholars, and collectors of African art. Prof. Roy invested the profits from the sale of the CD-ROM into video equipment he used to produce videos about art and life in Africa, which include twenty-six full-length documentary videos filmed in Burkina Faso, Ghana, Nigeria, and Niger, many of which are featured on the new website.

The first phase of developing the Art & Life in Africa website focused on updating the original CD-ROM content so that it is available to as wide an audience as possible. Moving forward, the Art & Life in Africa team plans to invite scholarly contributions that will address underrepresented areas such as modern and contemporary artistic practices and geographic locations like South Africa. These new essays and/or chapters will be added to the site on an ongoing basis.

An accompanying exhibit is on display at the University of Iowa Museum of Art’s Black Box Theatre through June 15. Tablets are available so visitors to the display can scan QR codes on each piece of art’s label. The code takes them to the corresponding page on the website, where they can learn more and find links to further information.

Under the direction of Scott Rodolitz this New Hampshire auction house recently had its first African art sale. You can download the catalogue here.

Of particular importance in this auction was a rare Mende staff with an early documented provenance. It was brought to Canada from Africa by Capt. J.L. Boddy and presented to E.D. Manchee in 1907 (as stated by his 1925 will). Only a handful of these staffs are currently known, most of them being much younger than this one. It sold for $ 10,800. 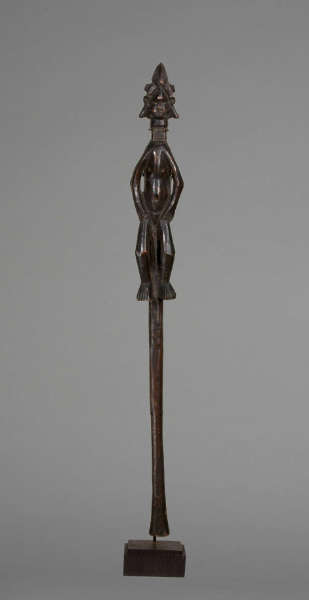 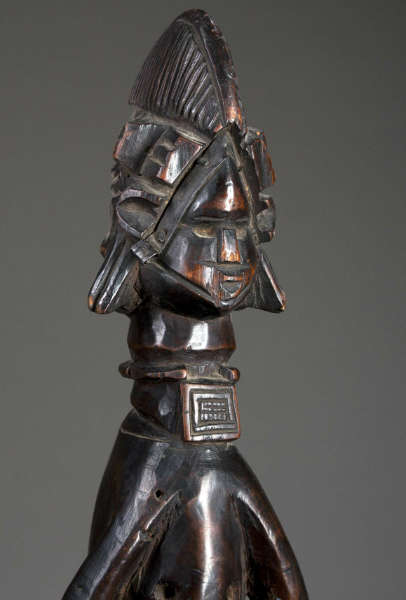 UPDATE: Christie’s will be selling another early collected (ca. 1885) Mende staff next month.

In the same auction two nice Nupe posts (mounted upside down) remained unsold with an estimate of $ 900- 1,200. 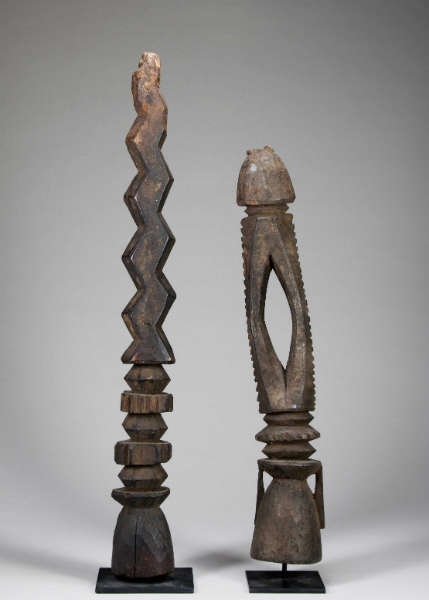 (all images courtesy of The Cobbs)