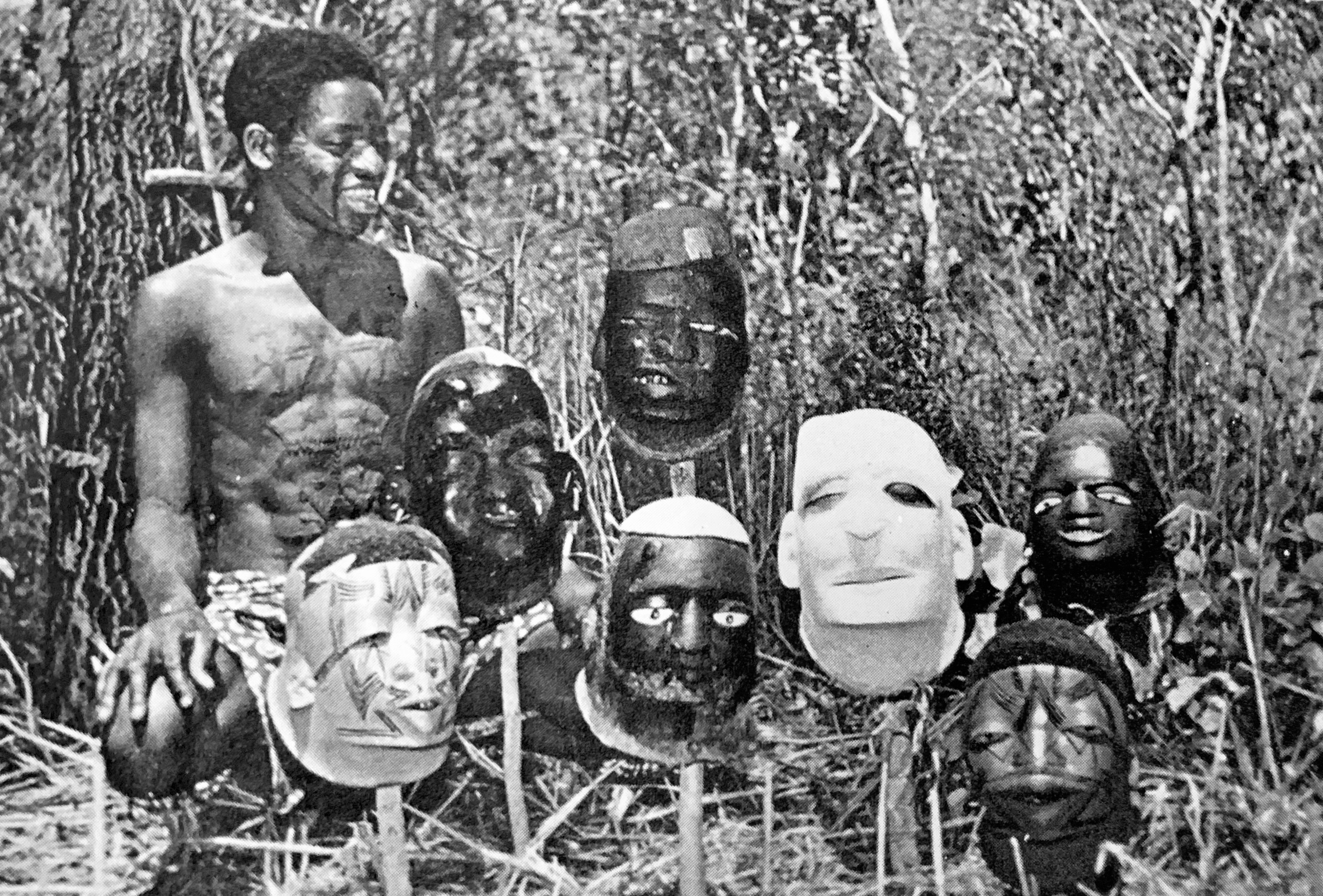 After my previous blog posts about Kiloko of Busangu and Mutisya Munge, a last story I wish to share from Robert Dick-Read’s book Sanamu. Adventures in search of African Art concerns his search for Makonde masks in Mozambique in the mid 1950s:

One of the first places I visited was a small village called Mboo, a few miles from Lipelwa. When I came to Mboo I left my car on the road, and walked up the path to the village at the far end. This consisted of two concentric circles of well-built rectangular thatched huts around an open space planted with mango, orange, and lime trees. Like most other Makonde villages it was spotlessly clean and in the centre of the open space was a small grass shelter where the villagers could meet to smoke and chat. Beneath the shelter several men were busily at work, carving. One had an elephant’s tusk on which he was incising miniature scenes from Makonde life in high relief. Another was chipping at a chunk of ebony with an adze, forming a beautiful head with a tall, mitre-like headdress. The babble of excitement caused by my arrival brought people running from their huts, to the shelter, where most of them stood in silence staring at me curiously as though I was some strange wild animal. Their spokesman was one of the carvers, a fearsome-looking man named Gogo whose incisor teeth were filed to a point, and whose face and torso were covered in cicatrised tribal markings. I told him why I had come, and that I wanted above all to buy some masks – “mpiko”, as they are called.

At the mention of mpiko a deathly hush fell over the crowd. Gogo looked around him nervously, then all of a sudden he jumped up and with a frightening yell chased all the women and boys away from the hut. One or two of the men looked at me reproachfully, nodding their heads and clicking their teeth, saying that it is no good to mention mpiko in front of women or small children who may only see or hear about masks when they are being used in a tribal dance. But their anger was short-lived, and after a few minutes they led me away to where the mpiko were kept. The mask-house was a small thatched hut hidden in a dense piece of bush two minutes’ walk from the village. At the entrance to the path leading up to it were two sticks, signifying that only full-grown men were allowed beyond this point. Yet, despite this rule, which no one would dare to break, voices were lowered when we neared the hut, and the mpiko were mentioned in hushed awe-stricken tones. Now that we were going to look at the masks, Gogo, who seemed to be a man of some authority in the village, posted a guard by the path to make doubly sure that no unauthorised person followed us in. Then he led me inside. Though there were no windows, sufficient light filtered through the doorway for me to see that the hut appeared to be quite empty. I had expected to see racks, or pegs, with masks hanging from them; but no – the place was absolutely bare.

For a moment I wondered whether I was being fooled, or thought perhaps that I had misunderstood them. But then Gogo, reaching up under the darkened eaves brought down a bundle wrapped in several layers of bark cloth, and unravelling this with great care, he revealed a mask. It was an extraordinary, helmet-shaped object, rather terrifying, and ugly beyond belief. It represented a man obviously of Gogo’s own tribe, for its yellow-ochre face was overlaid with ribs of black wax depicting the elaborate patterns of the Makonde tribal markings; and its hair was human hair, pressed into the soft white wood from which the mpiko was made.

As their masks appeared so sacred to the Makonde I wondered whether or not they would be willing to sell them. Though most of them were so gruesome that I could not imagine that any European or American would want them to hang up as wall decorations, I wanted to buy quite a large number for All and Nat to distribute to various museums in the United States. But when I suggested buying them to Gogo, he willingly agreed. Furthermore, after consultations with the other men, the price he asked was astonishingly cheap – only five shillings per mask. The reason for this was that, being made of very soft “njala” wood – the wood of the cotton tree – they were easy to make, and their antiquity was of no importance to the Makonde. They were hidden away not for the sake of preservation, but to keep uninitiated people from seeing them. Indeed sometimes they did not hide them in huts at all, but in particularly dense patches of undergrowth. There was an occasion later on when we were looking for a mask hidden in the bush when it took the man who hid it twenty-five minutes to find it. So I bought that mask at Mboo, and several others beside.

In the end Dick-Read would collect almost fifty Makonde masks before returning home. Ironically, the best mpiko he would ever come across, he found in London..

Two or three years later, in London, I was browsing round the shelves of one of the leading primitive art dealers in England when, high up a shelf, almost out of sight, I suddenly noticed a very unusual mask. To me it was unmistakably Makonde, for it had the same facial markings and other characteristics. It was particularly unusual in that it was neither a face mask such as those worn by the northern Makonde, nor a full helmet mask worn by the southern Makonde. It was what is called a “half-helmet mask” which covers the face but has a piece extending backwards over the crown of the head; and it was the only one like it I had ever seen. I asked the dealer if he knew anything about it, but until he had checked his lists he was not even sure it was Makonde. In any event he had no idea it was particularly unusual, and as, like most Makonde masks, it was not particularly beautiful to Western eyes, it had been sitting up there on the shelf for years, unsold. The price head on it was rather high, but after a bit of bargaining I persuaded him to let me have it for rather less than half the list price – just to get it out of his way. He wrapped it; I thanked him and, jumping into a taxi, drove straight round to the British Museum. Within half ann hour I had sold it to them (at a handsome profit) and a few weeks later it was published as the frontispice of the Royal Anthropological Insitute’s magazine Man – of of the finest and most unusual Makonde masks known.

That must have been one of the quickest sales to a museum ever! With a bit of sleuthing I was able to discover which mask Dick-Read is talking about. In volume 57, July 1957, of MAN, we indeed find a Makonde mask published as plate 1. With the listed inventory number, I quickly found it in the online database of the British Museum here. However, Dick-Read is not mentioned in the provenance or article, and it is stated that the mask was donated to the museum by Margaret Plass. A close friend of the curator William Fagg, she in all likelihood bought the mask for the museum. 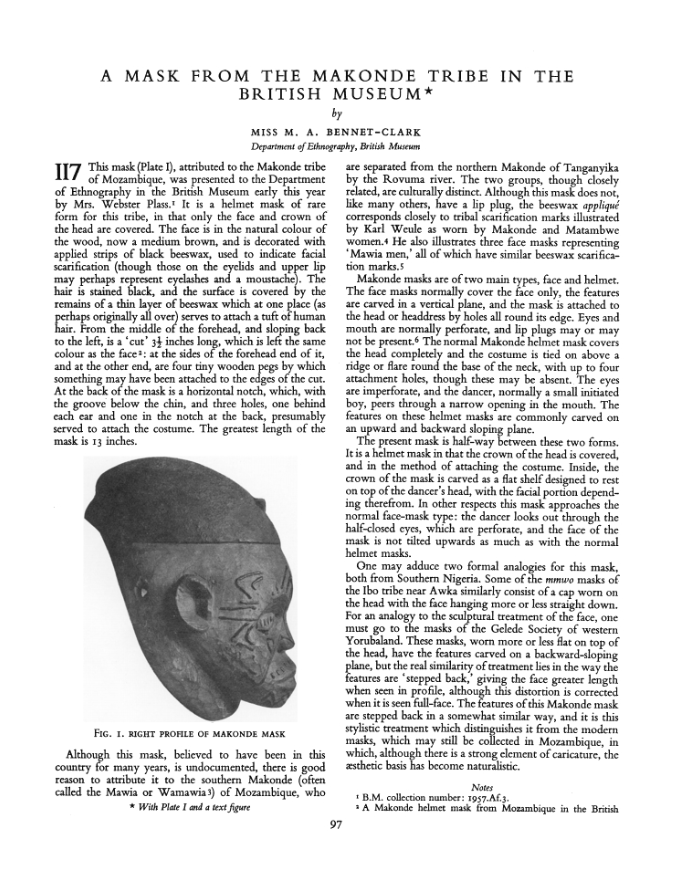 ps lets see if any of you sleuths can find one of the masks Dick-Read bought from Gogo !