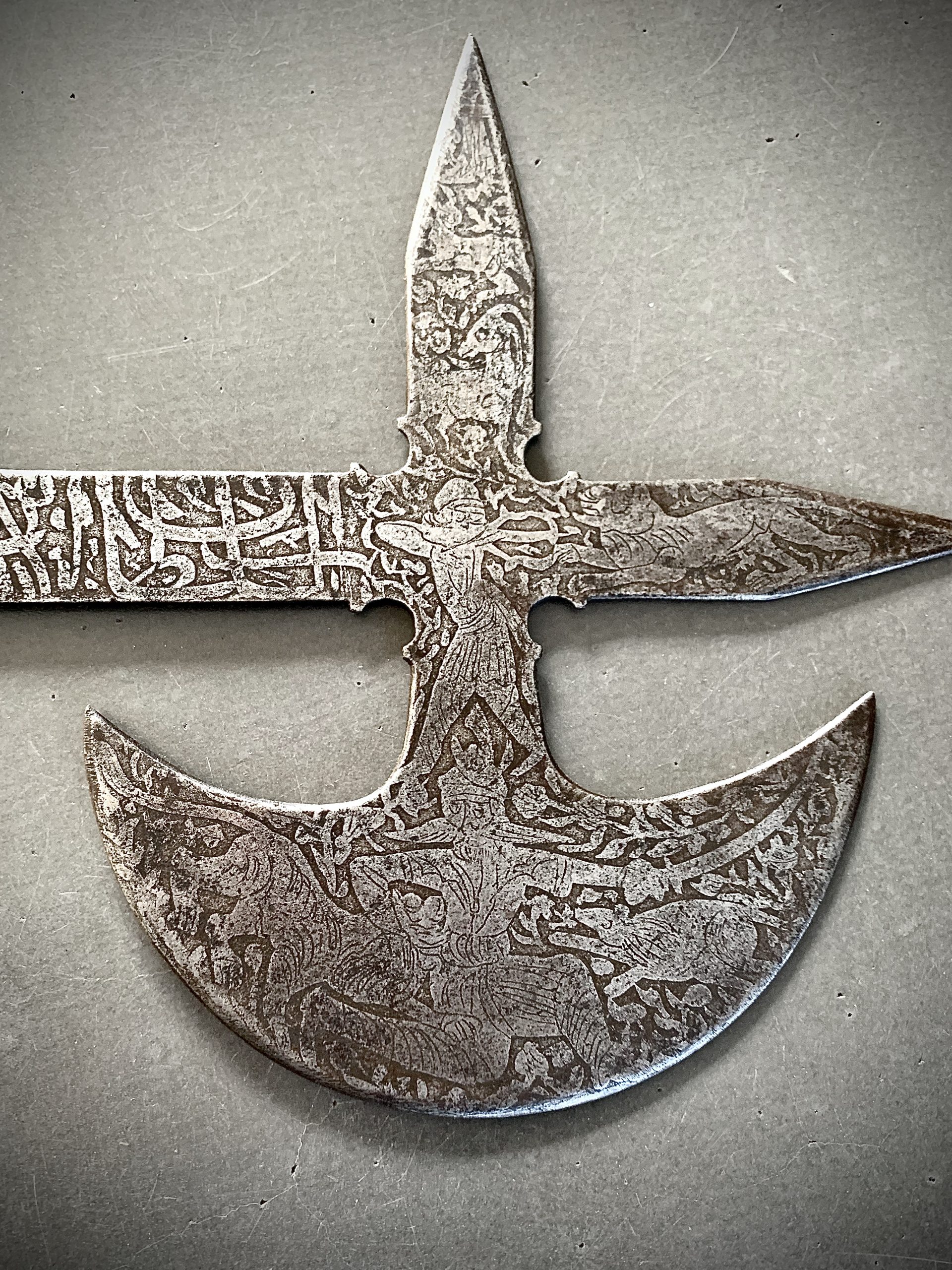 Yours truly is currently studying a Mahdist knife from Sudan and would love to decipher the acid-etched inscriptions. I’m hoping one of you knows someone who can read this Arabic script known as thuluth ? Additionally, I am most curious to find out the origin of the hunting scene depicted on the above blade. While this weapon (of which for now I can only share a detail) dates from the late 19th century, the style of this scene feels much older. Does anybody has a suggestion for a possible source? It feels copied from something.. Many thanks in advance!

In case you were wondering about the origin of this remarkable type of African knives, below a short introduction on them by Ethan Rider:

“Sudan was governed by foreign powers for most of the nineteenth century – first by Egypt in 1822 and then by Great Britain in 1873. The hardship experienced by the Sudanese population during this time produced widespread support for Muhammed Ibn Ahmad, who promised liberation alongside a renewal of faith. In 1881, Ahmad was proclaimed “the Mahdi” – the messiah and revolutionary leader – and he would go on to lead his Mahdist followers to military victories and the establishment of a vast Islamic state. The Mahdist regime came to an end after a defeat by the British at the Battle of Omdurman in 1898, and Sudan was again placed under British and Egyptian control until 1956. Most Mahdist blades were covered with acid-etched Arabic script known as thuluth, in which exhortations to the faithful from the Koran are written. Sometimes, thuluth script also included personal messages from the artisan, praising the person for whom the knife was made. This specific knife imitates a throwing knife of the Fur and dates from the 1880s.”

The Mahdist state was effectively dissolved in 1898. Indeed, many of these weapons were found on the battlefield after the British victory.  In his discussion of the two similar replica knifes in the Manchester Museum, Christopher Spring wrote (in Phillips, Art of a Continent, 1995, p. 134) notes:

“The increasing unrest among the peoples of central and eastern Sudanic Africa during the 19th century culminated in the rebellion of 1881 in Kordofan Province, Sudan, led by Muhammad Ahmad, who declared himself Mahdi (‘The Rightly Guided One’). By 1885 he had overthrown the corrupt Turco-Egyptian government in Khartoum and had established the Mahdist state. Peoples from a vast area of north-eastern and central Africa joined the Mahdist armies, either of their own free will or as slaves. Workshops set up in towns such as Omdurman produced a range of artefacts, including regalia, weaponry and armor, which in one way or another reflected the Mahdist ideology, but which occasionally also displayed stylistic influences from much more diverse sources. Among such objects were these non-functional, replica throwing knives, cut out of sheet metal and covered with the acid-etched Arabic script known as thuluth, in which exhortations to the faithful from the Koran are written. Most likely they were given as Islamicised (though still potent) status symbols to the leaders of those elements of the Mahdist armies that consisted mainly of central African slaves.”