The traditional centers of the trade in African art are generally considered to be Paris and Brussels. I was curious to see if there’s still a notable predominance of objects coming from the former colonies of both France and Belgium in the coming auctions in Paris. The graph below shows the percentage of lots coming from the ex-colonies in the next Sotheby’s sale. 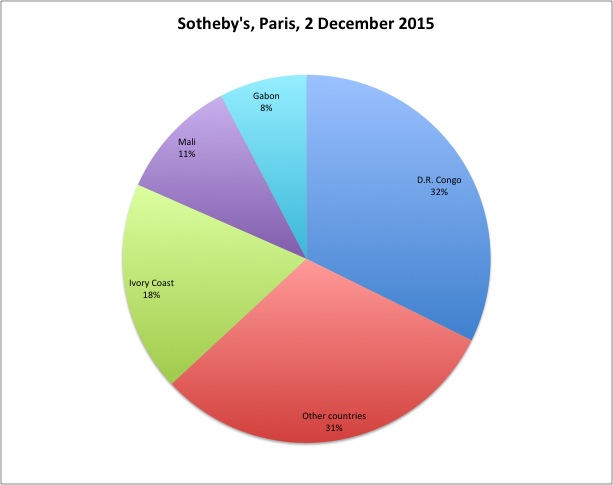 Almost three quarters of the African segment of the sale is made up of objects coming from Mali, Gabon and Ivory Coast (all former French colonies) and D.R. Congo. 21 objects come from D.R. Congo; that’s 32 % of the African part of the sale! The remaining 31% are objects from Nigeria (4), Congo Brazzaville (4), Cameroon (3), Ghana (2), Angola (2); and Guinea, Tanzania, Burkina Faso, Sudan and Madagascar (all 1 object). 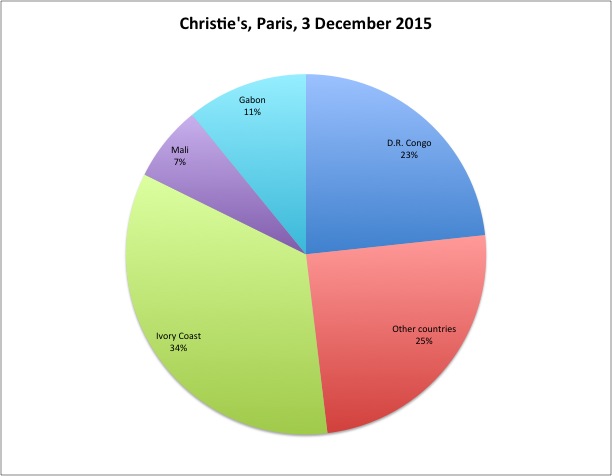 At Christie’s we more or less get a similar image, as only 25 % of the African lots in the sale don’t come from a former French or Belgian colony. From the 25 objects from Ivory Coast, 14 are Baule – so almost 20 % of the African part of the Christie’s sale is made up of objects coming from one specific group. The remaining objects, from ‘Other countries’, come from Nigeria (4), Cameroon (4), Sierra Leone (3), Burkina Faso (3); and Ghana, Guinea, Tanzania and Togo (all 1 object).

Of course, this is just a snapshot based on only two auctions – a much more balanced view would emerge if one would take into account several years of sales. Still, it is for example notable how underrepresented art from both Nigeria and Cameroon remains in these sales.. while art from the Baule and Kongo predominates. Another interesting calculation would be to take into account the estimates as well; in such a case especially Gabonese objects (Fang and Kota) would be most prominent when put in a graph. It’s clear that historical connections with specific African countries play a major role in the degree of presence at auction – especially in France.