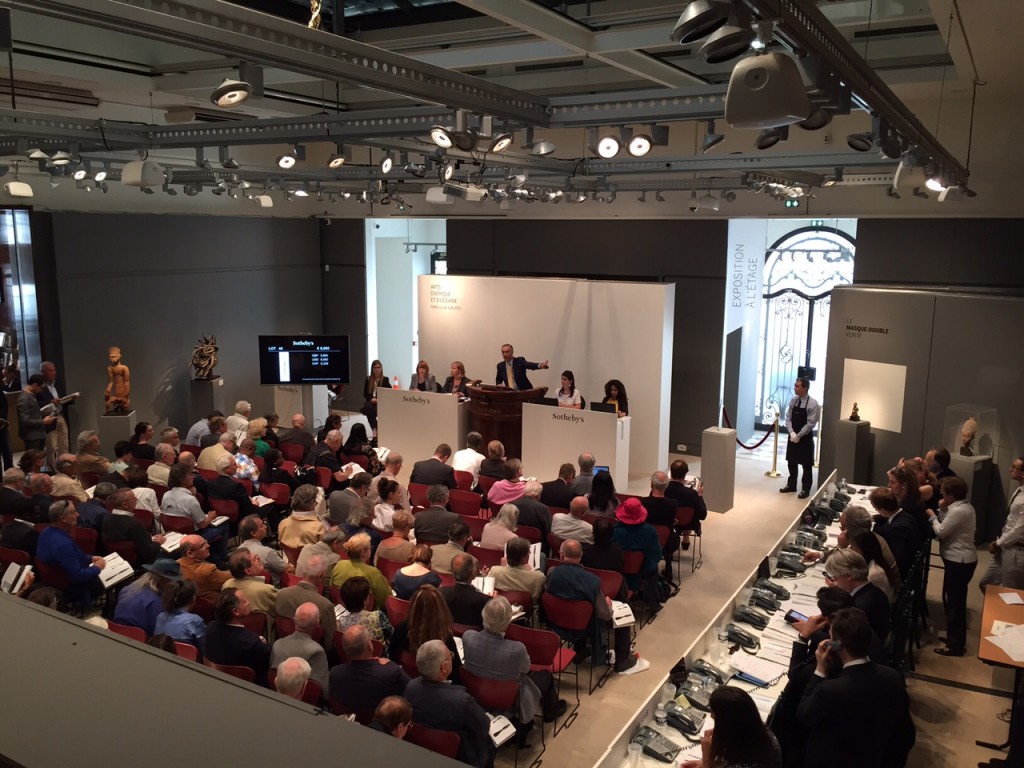 Sotheby’s African art sale in Paris on 24 June 2015 (info) closed the first half of what so far has been a spectacular year for African art (at least at auction). As with each sale these days, several new records were established. The double Baule mask (lot 26) sold for € 5,411,000 (estimated € 2-3 million), establishing a world record for a Baule object and the second highest price for an African mask at auction, and a classical Akan terra-cotta head in its turn reached a final price of € 855,000, a world record for such an object. With a final result of €11,1 million (above the total high estimate of € 9,9 million), this sale achieved the second highest total in this field in France since the market opened – it’s incredible that the Baule mask alone is already responsible for half that result – it was the cover lot after all. In total, the sale sold 76 % by lot – just below the 78 % at Christie’s the day before (reviewed here).

An interesting start of the sale was the Klein collection (lots 2-25): a nice group of small and big figures from the different Kongo groups. This collection (or better, a selection of it) was amassed over twenty years and clearly a work of love. However, of the three figures estimated above the € 100,000 mark only one found a new owner: a Bembe-Gangala statue sold for €123K. Note that in April this year a figure from the same workshop, without provenance and at a small auction, was sold for € 118K (info). The big (but not very attractive) Dondo-Kamba figure (estimated € 150-200K) failed to sell, notwithstanding its excellent provenance and publication history; and the kneeling (also not that enticing) Kongo Minkenge statue (lot 12) with the same estimate also wasn’t able to attract a single bid. Both lots are perfectly fine, and made sense within this particular collection, but in the end both just missed that extra bit of power that you want at such a price level – that little Bembe figure in its turn easily overpowered the majority of this collection (and thus easily found a buyer). This is also perfectly illustrated by lot 18, a big Bembe-Dondo figure (also unsold, estimated €60-90K); it shows that an excellent publication history sometimes isn’t enough. Anyhow, all in all, only 5 of the 24 lots from the Klein collection remained unsold, so that’s certainly not bad. A personal favorite was lot 3, a small Kongo figure with the head turned sidewards and a small faceless miniature figure attached. As with many other lots from this group, I guess the estimate was below what they once had actually paid, and in this case I was not surprised the dealer that once sold them this little gem bought it back (at eight times the low estimate). Another object with a lot of charm was the seated Yombe figure; it tripled its low estimate and was hammered down for € 17,5K. A Teke figure, by the by yours truly identified ‘Maître de la barbe cunéiforme’ failed to sell at an estimate of € 25-35K while another (slightly better) statue from this sculptor (still with its power charge intact and with a better provenance) had been sold for €111K last year. An excellent seated Bembe figure (info) holding a fly-whisk was sold for €37,5K – as the majority of the objects of this group within the estimate. So did the next three lots, three straightforward Bembe figures (lot 19, 20 & 21) that sold a very reasonable prices, indicating a lack of interest in this quality level at an auction like this. Contending for the best gain of the day was a the Vili maternity figure which was sold for a very serious € 147K – in 2008 it exchanged hands in Paris for € 26K, so that’s a sixfold increase in seven years. The only zoomorphic figure in the group, a Kongo dog figure (lot 17) sold for five times the low estimate at € 25K – its profile was exceptional and, since these are quite rare, I had expected that I would sell for even more. A last lot of the Klein collection in the sale, a Bembe figure once in the collection of Guillaume Apollinaire (lot 25), that had been shown in NY in May, sold within the estimate for € 50K.

After the Klein collection, there were two Senufo objects collected by Karl-Heinz Krieg (as in each of the last Sotheby’s Paris sales), especially a bowl with a seated figure on the lid (info) was nice and sold for only € 25K. Next up was a rare Attié mask. The juxtaposition with a late Mondriaan painting in the catalogue was incomprehensible – neither of the both works has anything to do with each other. I guess it’s about the red lines, but the catalogue note misses any explanation. While being estimated € 300-500K, bidding started at a low €180K and quickly came to a standstill at € 220K – nonetheless the mask is listed as sold for € 303K on Sotheby’s’ website so it found a new owner in the after sale. It’s a great and ancient mask, but the corpus of this type of masks is so small that it failed to generate a lot of attention. A big surprise for me was the next lot, a Songye figure; it sold for double its low estimate at € 700K – again the juxtaposition with a modern Western ‘painting’ (a Lucio Fontana this time) remained unexplained and made not much sense. There have been so much big Songye figures of this caliber on the market in recent  years, but they do keep finding buyers, at ever more elevated prices: the market for Songye sculpture remains very strong – rightfully so in my humble opinion. 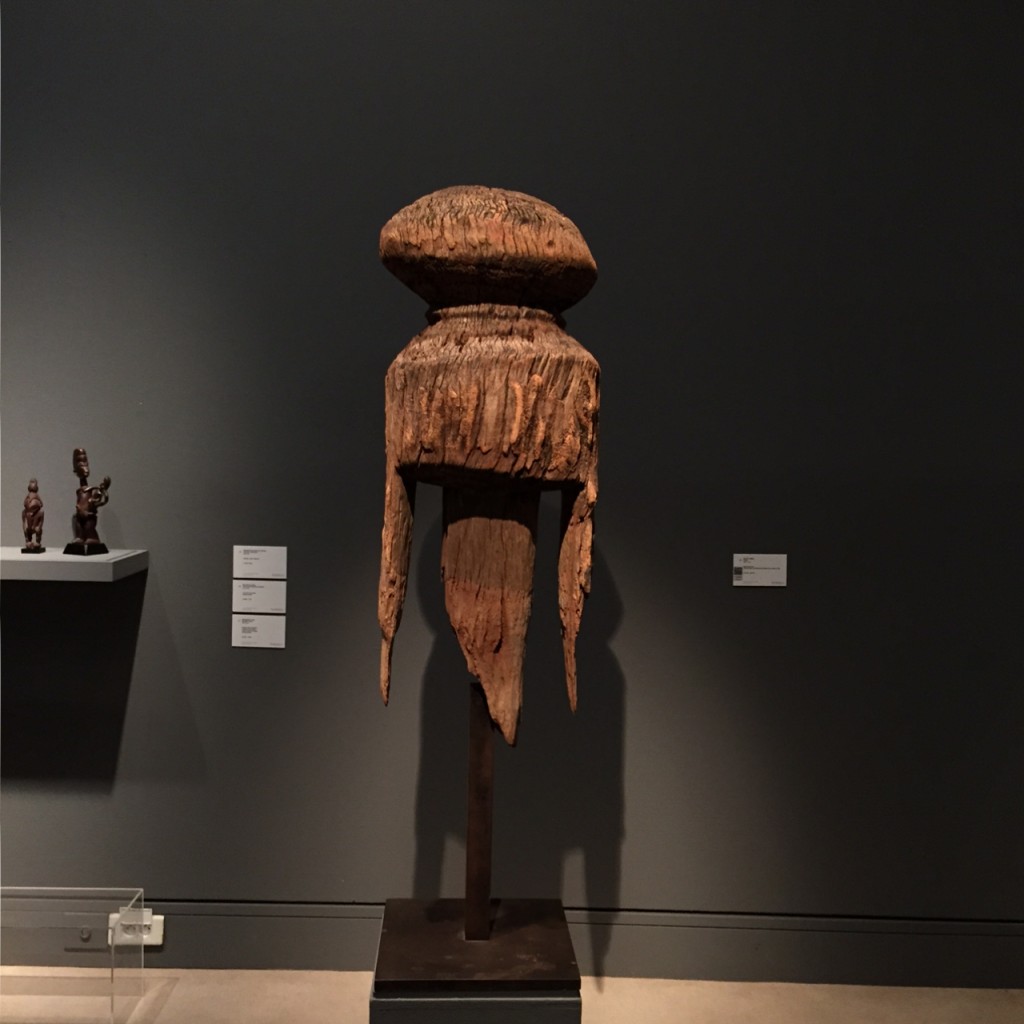 Next up were 10 objects selected from the Durand-Dessert collection. During the 2008 edition of Parcours des Mondes, this collection had been shown in Paris in a highly praised exhibition called Fragments du Vivant which for the first time presented this very personal selection to the public. The catalogue, with pictures from Hughes Dubois, is highly recommended. 9 of the 10 objects were sold, all of them above the low estimate. The object that possibly embodied the spirit of the Durand-Dessert collection the best was the fragmentary Moba figure illustrated above (info). 111 cm high, one can imagine what a massive figure this once must have been. Even in this eroded condition it still radiated power; I personally consider it one of the best of its kind and remember being totally blown away by it in 2008 (as were many). Before the sale there was a lot of commentary on the estimate: € 150-250K was unheard of for such a figure. Again, Sotheby’s proved to be pushing estimates (rightfully in this case in my opinion) and succeeded in selling the figure for € 243K to a telephone bidder. Also best of its kind was the Wé miniature mask just before. Estimated € 15-20K, it was hammered down for € 43,750 after a short but intense bidding war – a record price, yet totally justifiable as it will be impossible to find another example still so complete. Another favorite was the ivory Lega mask. Liliane and Michel Durand-Dessert had bought it at auction from Sotheby’s in Paris in 2006 for € 191K (info); nine years later the underbidder at that sale got a second chance and bought it for €291K – still a very good price seen the size and age of this mask. Liliane & Michel Durand-Dessert had the luck to be in Paris when the first shipments of Mumuye statues arrived in Europe in the late 1960s; this sale included one of the better of the nine examples they have in their collection. This statue wonderfully embodied what Mumuye sculpture is all about and sold for € 99K (est. €40-60K). For me a surprise was the last lot of the group, a Senufo helmet mask, estimated already very highly at € 120-180K, it exchanged hands for a staggering €255K to the same telephone bidder who had opened the sale in style by paying € 195K for a vessel from Magdalene Odundo from 1994. Obviously the Senufo mask had a lot of what they call ‘wall power’ in the contemporary art world, yet this result seems a bit higher than the real market value of this mask. The reason behind the juxtaposition with the painting from Wilfredo Lam in the catalogue escaped me, but I guess such Western art works are placed in the catalogue with a another public in mind – which clearly worked.

After a group of Oceanic art, of which the highest estimated lot (a €700-1,000K Uli figure) failed to sell, we traveled back to Africa. A telephone bidder snapped up the Guro mask by the ‘Master of Bouafle’ (lot 56) for € 339K (est. € 120-180K). Some didn’t like its patina, but I found this gracious mask a winner from all sides. The next lot, a Senufo figure, which also had been shown in New York last May, did not sell at an estimate of € 300-400K – which did not surprise me at all. A lot where the estimate was at the other extreme, being much too low, was the Luba staff: estimated only € 10-15K it generated a lot of interest and was bought by a Belgian dealer for €52,500 – I thought everything above the waist of this figure was pretty spectacular. Another low-estimated lot was the ivory Lega head without eyes (lot 66); estimated € 4-6K, it sold for € 25K. As observed in the Christie’s sale the day before, reasonable estimates allow the market to play – which certainly happened with these two lots.

Impressively welcoming visitors at the entrance of the preview during the previous days, the eroded Bamileke royal figure from the Delenne collection was sold just above its high estimate for € 735K. The Cleveland Museum of Art in 2010 acquired a small but excellent group of Congolese objects from this collection (info); Costa Petridis wrote the accompanying catalogue to this purchase (which features a collection photo with this magnificent statue). In December, Sotheby’s Paris will be offering more objects from the Delenne collection (mostly coming from Oceania). Another interesting lot was the elegant Kota reliquary figure; previously unknown, it doubled its high estimate and sold for € 101K after a lot of interest had been shown in it. 15 more lots followed, but I had to leave to catch a homebound train – this review is already too long anyway.

So, as auctions are still considered an important indicator of the health of the market, this sale (together with the one from Christie’s the day before) shows the market for African art certainly is not slowing down. Once again, the stellar lots made stellar prices. And, as Sotheby’s with each sale keeps pushing estimates higher (at least for top quality lots), and is able to successfully find buyers for these works, it is clear that at the level of the high-profile objects the market is very strong*.

* I’m aware my focus in these reviews mainly is on this small group, but it are these results that are pushing the market (and thus interest in) African art forwards.