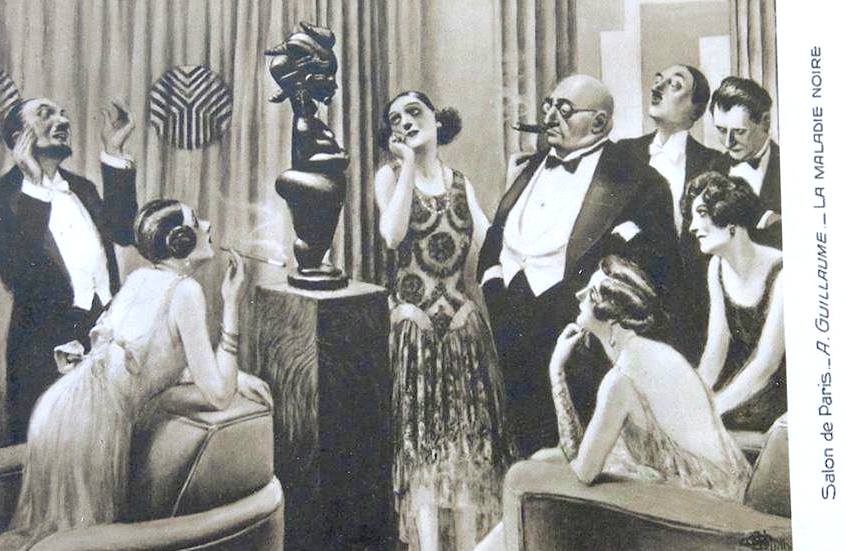 I love this postcard. It’s called “La maladie noire” – which freely translates to “The craze for African art”. It is a drawing by Albert Guillaume – I don’t know if he’s related to the famous Paul Guillaume. Looking at the dresses of the women I would say it’s from the 1920s. That the scene is taking place in Paris we know from the title “Salon de Paris”. Central in the scene is a wooden female figure from the Baule (Ivory Coast). On its right we see it’s owner, cigar in the mouth, hands in his pockets, he’s pleased to show off his new acquisition, but his mind is already somewhere else. On his left, his wife rests one hand on his shoulder, while supporting her head with the other; “Mon dieux, what do I have to do with this black goddess in my house?” you see her thinking. Her friends, sitting down, are as mystified about the presence of this enigmatic, yet voluptuous sculpture central in the salon. Most left, an art-critic (or a merchant?) raises his hands, awe-struck by this exotic beauty and praising the eye of the collector. On the right, behind the owner, we find two fellow-collectors. The first, chin up, clearly is convinced that this statue is inferior to the one he has in his own collection; while the man most right has a rather mean posture – with hate observing this craze for African art that is taking place all around him in the Parisian art circles. In other words, most likely a perfect rendering of what was happening in the salons those days – and sometimes still is..

UPDATE: a reader was so kind to send me a link with more information about Albert Guillaume, find it here.

UPDATE 2: in the meantime, I was able to localize the Baule statue, identified 3 of the featured persons and discovered what that round object in the background is – read all about it here.

One reply on “Postcard of the day: “La maladie noire””