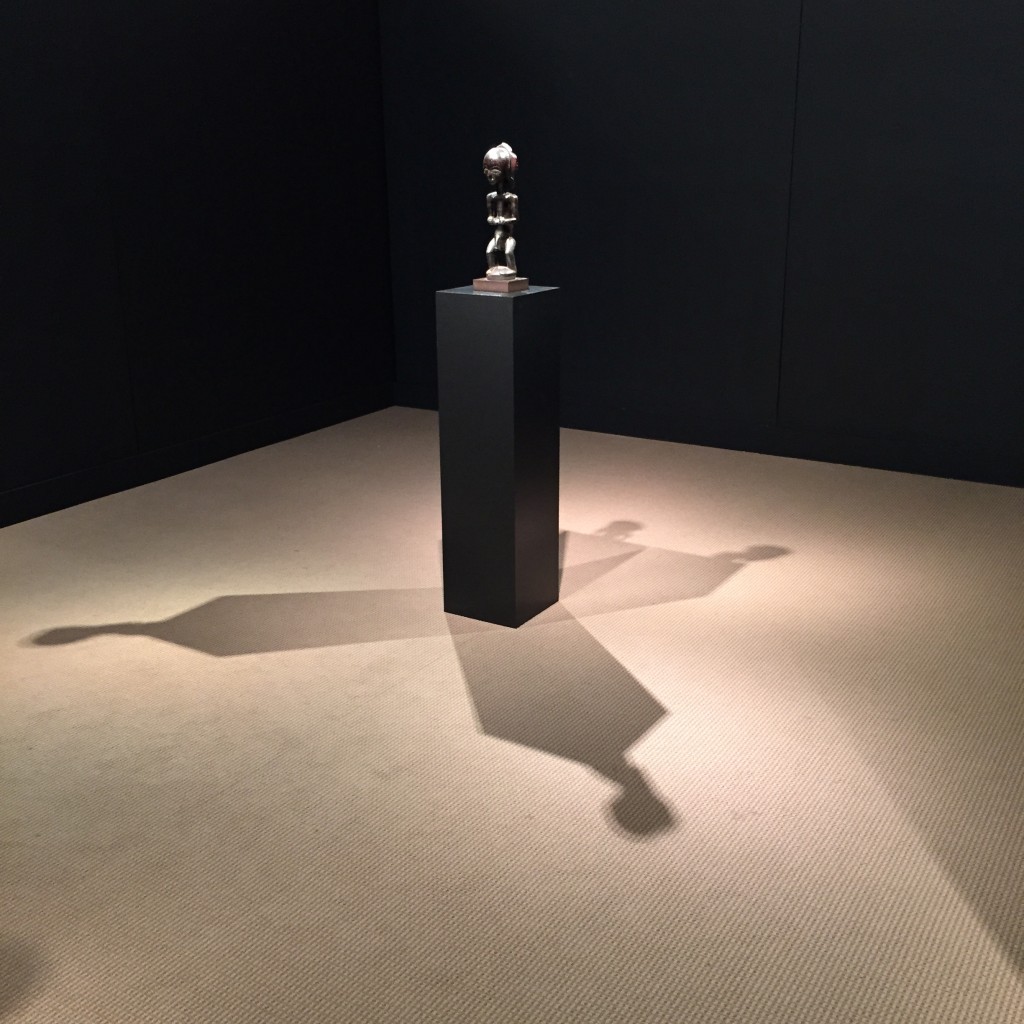 Apologies for the lack of posts these last weeks, I was working on Sotheby’s May 15th auction of African, Oceanic & Pre-Columbian Art in New York – although it is hard to consider the week spend in summery Manhattan as ‘working’ 🙂 So, how did the sale do ? Just for the African lots (lots 95-189), the total result (inclusive of buyers premium) was $9,139,125 against a total estimate for this section of $6,188,500 – 9,888,500, in other words just a bit under the high estimate. The sale total was $3 million higher, $12,144,375 (including premium) – the African half of the auction thus performed much better than the Pre-Columbian art. The 13 Oceanic lots were dominated by the monumental Bismarck head, which was sold for $ 1 million.

Star of the sale was the cover lot, the Luba figure from the Warua Master. As seen above it was presented in a separated “black cube” (opposed to the white cubes ubiquitous in the contemporary art world?) under a very strong light – which unfortunately attracted a lot of attention to the huge amount of dust accumulated in its sticky surface (a restorer surely will have to spend an extended period of time with it!). Bidding started at $ 1,5 million (half of the low estimate). There was one bidder in the room and two others on the telephone; the first got it: the statue was hammered down at $ 3 million – $ 3,610,000 adding the buyer’s premium, becoming the most expensive Luba figure ever sold at auction. The previous holder of that record was the Luba statue from the Alan Mann collection, sold by Christie’s in December 2008 (lot 328) for $ 703K. Notwithstanding this remarkable result, selling at the low estimate (without premium), it is clear that Sotheby’s had expected of course a bit more from this statue. The interest limited to 3 collectors, the number of interested parties ideally would have been higher. In my view, the high estimate certainly played a role, but that in turn might have been necessary to persuade the consignor to let Sotheby’s sell the object. Remarkable was the fact that the statue itself was absent at the cocktail party Sotheby’s had organized the evening before the sale. It had moved to another floor for a private viewing. I thought that was a shame, but I can understand Sotheby’s had to accommodate the wishes of an interested party.

Back to the auction, the first African lot, an a-typical Kota reliquary (lot 95), did surprisingly well selling for almost double its high estimate at $ 47,5K. The next lot, a Vuvi mask was snapped up by a dealer at $ 32,5K, just above the low estimate. The “Dali”- Kota attracted only a single bid (notwithstanding its four pages in the catalogue) and sold for €100K. The next reliquary (lot 98) sold within its estimate for $ 27,5K; while a last, extremely shiny, example (lot 99) was bought by a NY dealer for $ 81,5K. Predicting the results of these Kota figures is an art form in itself. The next lot, the “Prince Saddrudin Aga Khan Fang ngil mask” (info) performed very well, more than tripling the low estimate at $ 970K. Funny detail, for the preview the beard was detached. The Fang figure in its turn failed to sell, notwithstanding the description by Louis Perrois. Petite histoire: the famous Billy Jamieson originally discovered this statue in a small sale in Toronto.

The next big lot, the Kasai helmet mask (lot 111), sold for $ 490K to a telephone bidder. It’s origin is still heavily discussed, during the preview nobody came forward with a definitive attribution – for me it is a Biombo mask (yours truly is even cited in the catalogue). Anyhow, I must say this mask looked even better in reality: it is something special – without wishing to comment on its value – which, as always, is in the eye of the beholder. Somebody did a good deal with lot 113: selling for $ 20K, this Kuba drum was sold a couple of months ago for peanuts at a small US auction – I had passed on it since I didn’t fancy the idea of paying the shipping costs, my mistake. The Lwena mask, estimated $ 300-500K, did not sell – although the final bid ($ 280K) would already have been a record price for such a mask. The Chokwe bird mask (lot 115) sold for $ 75K, just above the low estimate. It had already been unsuccessfully offered by Sotheby’s last year, at a much higher estimate.

From the Segy collection, a small Fang figure from a known hand, estimated $ 12-18K, sold for $ 75K. A Belgian dealer bought the Yombe maternity figure (lot 133) for $ 30K. A nice pair of Dogon dogs should have done better and sold within the estimate for $ 21,250. The fragmentary Mossi mask (lot 152) failed to sell (estimated $ 60-90K). That rarity alone isn’t sufficient to generate interest was proved by the Attie ladder figure (info), which remained unsold at $12-18K. A Chinese collector bought the Senufo helmet mask for $ 27,5K – he was also the underbidder of the Baga mask (lot 165) – which sold for $ 47,5K. This Senufo mask, also known as a firespitter, somehow does resemble Chinese dragon iconography. I did not understand why somebody paid $ 21,250 for a standard Asante doll. One of my favorite objects in the sale was a Baule buffalo mask (lot 177), with sold below its estimate at a mere $ 6,875. It had an incredible usage patina (with the typical egg shells) and was carved with an eye for detail (check those molars!) – it might not have been aesthetically pleasing, but that’s how they should be. Another steal was the Yoruba epa helmet mask, which sold just above the low estimate for $ 31,250 – no money for such a museum quality object by one of the best known Yoruba carvers. I also liked the rare Ijo rattle (incorrectly listed as a headcrest in the catalogue), which was bought by a French dealer for $ 9,375.

The biggest surprise of this auction might have been the Edo terracotta head from Benin which sold for $1,930,000, almost five times the low estimate – and even that low estimate would have been a record price. It did get 8 pages in the catalogue of course, and it was hard to hate that beautiful picture of the open mouth in profile. I guess it is now the most expensive terracotta object from Africa ever sold at auction. Perhaps the most coveted object of the whole auction was the last object, a copper alloy head attributed to the Udo Kingdom (lot 189). Intensely pursued by multiple bidders both in the room and on the telephone, it was sold for seven times its low estimate for $ 730K. The very low estimate of this enigmatic head, $ 100-150K, surely had awakened a lot of interest; one can only wonder if this would also have been the case if the estimate would have been higher. Surely, estimating an object like this is not easy – it is not a classic Benin head and very naturalistically rendered. Personally I have more the feeling that it represents a young princess, instead of a ruler (as stated in the catalogue). Also the attribution to the Udo Kingdom for me is based on too little facts (the presence of related figures at Udo in the 1940s). However, with only three of the sixteenth heads of this style in private hands, this was obviously an unique opportunity (note that the head from the Schnackenberg collection now is in the collection of the Museum for African Art, NY – so it current whereabouts are no longer unknown, as stated in the catalogue). This head is what they call a treasure and many will regret not getting it after starting to dream due to that low estimate – well played by Sotheby’s!

As a final remark, I would like to note that only 4 of the African objects (the Fang mask, Luba figure and two Benin heads) were responsible for 80 % of the sale total of the African half of the auction. A lot of the “smaller” objects did not do well or did not sell at all. This raises questions about the current state of the so-called middle market of authentic objects that just miss that extra bit. The Sotheby’s sale did not prove to be very forgiving for them, especially if the reserve price was too high (which was often the case). It shows once again how selective this market has become. However, in their own summary of the auction Sotheby’s stated that “this auction result confirmed the continued strength of the market and solidified the status of this field as a major collecting category.” – that wouldn’t be my conclusion. Obviously, the luster of the top lots did not translate to the adjacent lots and the market is becoming more and more segregated, but that’s a discussion for another time.

[…] see back was the Luba figure from the Warua Master (sold by Sotheby’s NY earlier this year; info), on view at Bernard Dulon – now without the ugly restoration of the feet and its oily patina […]