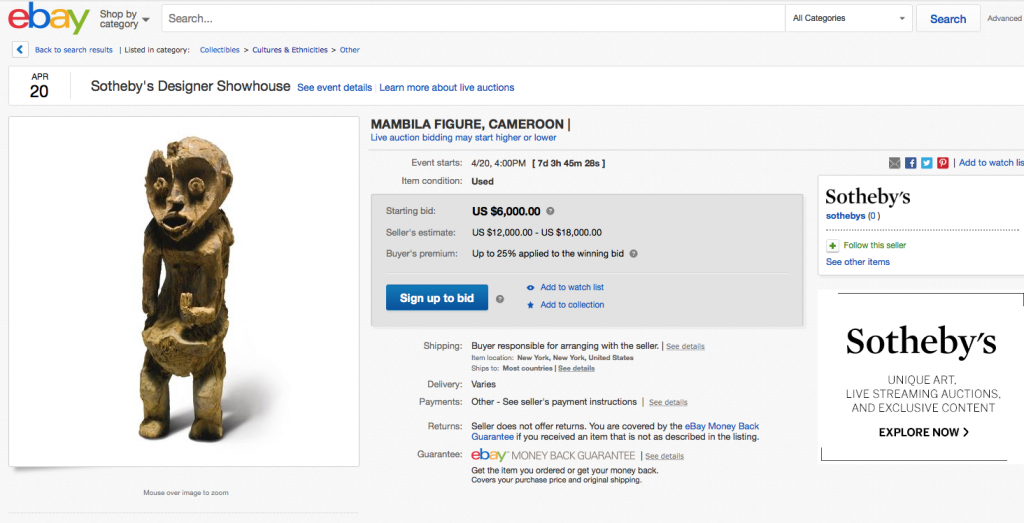 Last year, Sotheby’s announced a new* partnership with eBay and since this month the auction house that conducts sales in Paris, New York and other cities has a new ‘venue’: a special area on eBay’s website built specifically for Sotheby’s – you can find it here.

*Note that this is not the first attempt at a partnership between eBay and Sotheby’s. The two companies partnered over a decade ago, in 2002, for about a year before calling it quits (some history about that here).

The intention, from both eBay and Sotheby’s, is to make high-end auctions accessible to a broader audience. Personally, I’m a bit in doubt; Sotheby’s and Ebay play in very different leagues. Furthermore, there’s nothing wrong with the excellent online bidding platform of Sotheby’s. With the partnership Sotheby’s clearly wants to lure in some of eBay’s 145 million active buyers. The question, however, remains if many of the regular Ebay buyers will be interested in participating in these high-end auctions ? I known many collectors and dealers who have bought and sold on Ebay, but never above the $ 5,000 mark. It’s interesting to note that when you sign up for the auction, you have the answer the question: ‘How much you plan to bid?’ as part of the review of your personal information ! There are four options: below $10K, between $10-50K, between $50-100K and above $ 100K. I’ve never been asked this information while signing up for an auction, but I can see why Sotheby’s would want to know.

Furthermore, I think the association with eBay isn’t very good for the integrity of the Sotheby’s brand, or, as Bendor Grosvenor puts it (here):

The whole thing cheapens both product and seller – mainly because it’s obvious that Ebay is the leading site/brand, and not Sotheby’s. It looks like Sotheby’s is just a regular seller on Ebay, like a random grandmother selling knitwear. The existing Sotheby’s online bidding platform is pretty good. I can’t see how this will be a success in markets like China, where the luxury of a brand is all-important. Sotheby’s is a great brand – why diminish it?

When it comes to African art, eBay is full of bad copies and fakes – I would dare to say that 99 % of the African art on Ebay isn’t authentic. Is this the context Sotheby’s wishes to be associated with ?  Interestingly enough, the next Sotheby’s sale on eBay, on 20 April (info), features a small group of African art (15 objects in total).

Also from the Stone estate are a terracotta Akan head, another Makonde helmet mask and a rare Sudanese throwing club (starting at only $ 400). There are also three objects from the Ladislas and Helena Segy estate (of which Arte Primitivo already sold a good share): a Bamana headdress, a Bamana mask, and a Fon staff. The remainder of the objects include a Guro antelope mask, Dan miniature mask, Dan mask, and a Mossi container. Clearly, as far as African art is concerned, Sotheby’s sees this as an outlet to get rid of unsold inventory from previous sales or smaller works from newly consigned estates.

One last issue that remains unmentioned in the promotional blurbs is that the buyer at these sales has to pay a premium up to 25 %, while during regular eBay transactions it is the seller who’s paying. I wonder if this will prove to have been a good idea or not: for now, Sotheby’s eBay feedback still is listed as “0”.

I would have thought Sotheby’s biggest barrier selling on eBay is the need on the part of buyers actually to see the piece. Of course many will have seen the pieces offered in “real” sales such as Stone’s. And turned them down. For example I saw the Mambila figure before Sotheby’s arrived on the scene and then at the preview. Turned it down both times because of the lack of a surface that would help judge authenticity. Nice sculpture however.

On the other hand the partnership might work on low end items if Sotheby’s is careful and the buyer can rely on them to offer only authentic material. I’d buy utilitarian objects, weapons or jewelry that Sotheby’s can’t afford to sell in big auctions. They have to be serious with starting prices however. To me $1000 for the miniature Dan mask isn’t a serious starting bid.

while somebody else responded

One reply on “Sotheby’s selling African art via Ebay”

[…] I reported here last week, Sotheby’s is now selling African art via eBay. Now that the auction is over, […]