The highlight of the next Sotheby’s sale obviously is the cover lot, a Luba statue from D.R. Congo, attributed to the so-called Warua Master (info). Fourteen (!) pages of the catalogue are dedicated to this lot – Myron Kunin’s Senufo statue got 18. Heinrich Schweizer’s catalogue note contains a very interesting paragraph about the “strong adherence to geometric principles” of the Warua Master. He writes:

The tangent connecting the upmost point of the eyebrows is a horizontal line dividing the face from the apex of the forehead to the chin into two exact halves (see the below drawing). While the upper half is plain, featuring only the forehead, the lower half is visually dense as it contains all facial features – the Warua Master uses the juxtaposition of visual void and density to create tension. Furthermore, the face is inscribed into a perfect ellipse of vertical orientation. The upper half of the ellipse follows exactly the outline of the forehead from its apex to about the line dividing the face into upper and lower half. In the lower half the outline of the face withdraws subtly to the inside. However, it is the lowest point of the beard that falls with mathematical precision onto the nadir of the ellipse. Inside the face, eyebrows and jawbones create two nearly elliptical shapes of horizontal position which follow the same length and width ratio as the vertical ellipse into which the face is inscribed. 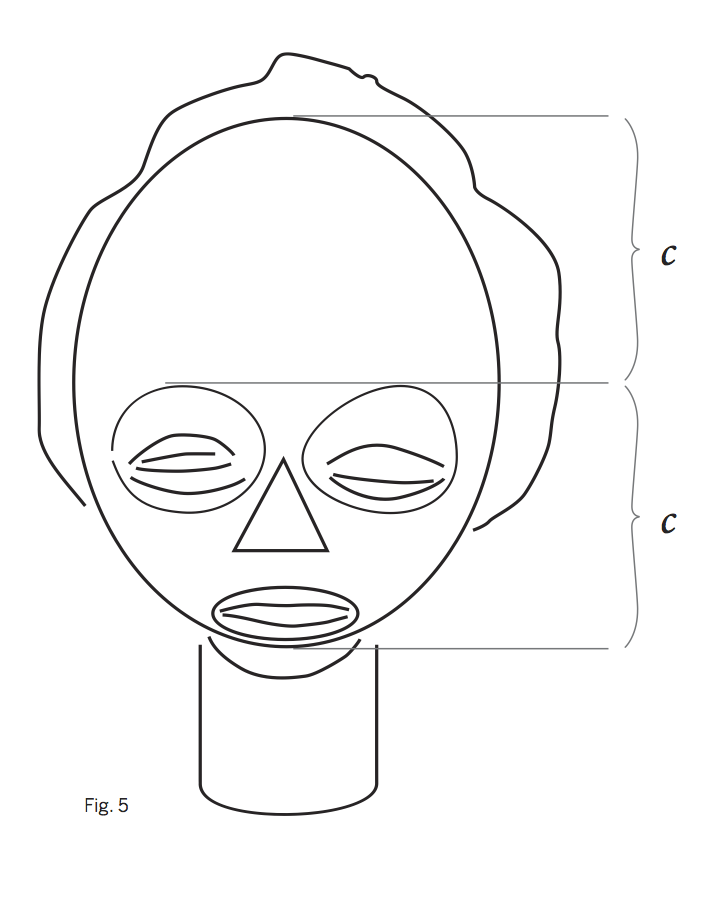 Schweizer continues (and here it gets really interesting):

In light of these strong inherent tensions it is surprising that the face overall exudes so much tranquility and serenity. How does the artist do this? The answer has to do with the position of the eyes and is mesmerizingly mathematical (see below drawing): inscribed in the two smaller, horizontally positioned quasi-ellipses are laterally wide and medially narrow eyes. The virtual horizontal line connecting their inner corners of these eyes (i.e., running right through their middle) bisects the length of the face such that the distance from this line to the bottom of the neck is equal to the distance from this line to the top of the forehead, is equal to the distance between the outer points of the two horizontal quasi-ellipses. We may define this distance as b.

The ratio of the distances measured by a and b corresponds to a formula which is well-known in aesthetic studies and art history as the golden ratio of proportion. It has been observed in ancient Egyptian sculpture, Greek architecture, early medieval painting and was propagated widely during the Italian Renaissance, most famously in Leonardo da Vinci’s Vitruvian Man (1492) as manifestation of the divine spark visible in the greatest masterpieces of creation. This ideal proportion is mathematically defined by an irrational number that is approximately 1.618 and most often replaced by the Greek letter Φ.

As the drawings and the above show, a number of the aesthetic choices made by the Warua Master follow the golden ratio with an uncanny mathematical precision – although we don’t know whether this is a result of intuition or calculation. 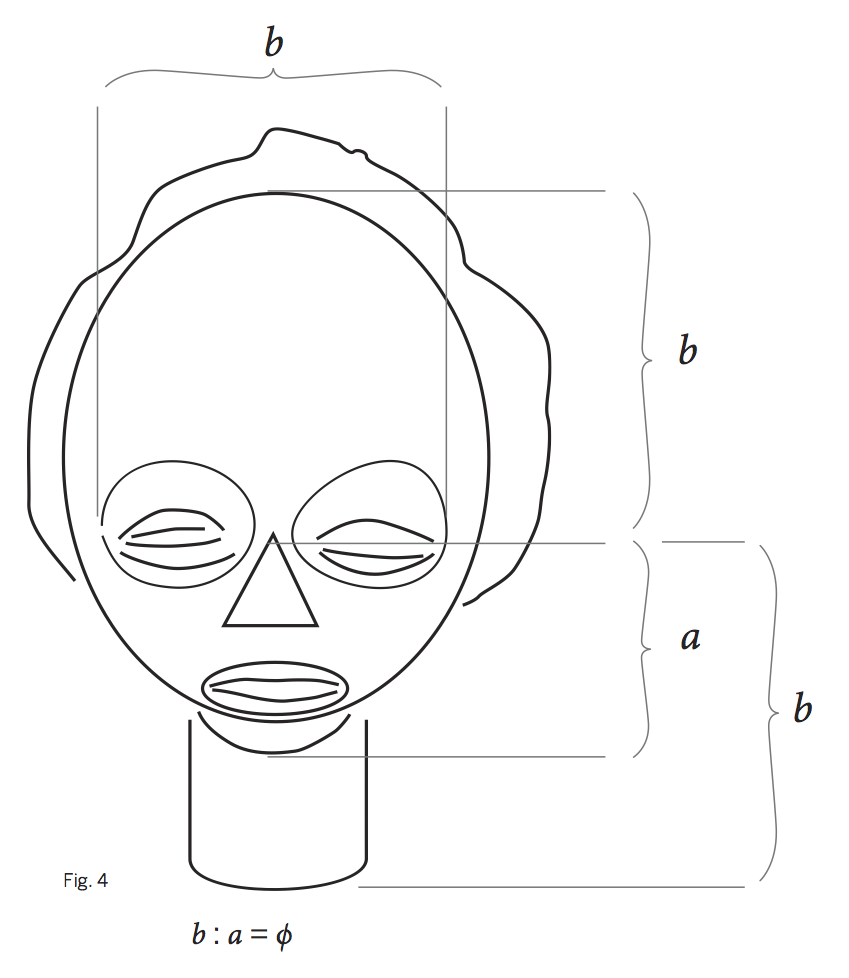 To my knowledge (and do correct me if I’m wrong*), this is the first time the golden ratio has been applied in the analysis of an African art object. I’m confident that once you start looking you can find it in a lot of other objects too. For example, have a look at this Mende mask in the same catalogue. It is possible to see the golden ratio in anything, really. While the relation between the golden ratio and aesthetics remains highly debated in academic circles (for example here), this analysis certainly helps to better understand and appreciate the beauty of this Luba figure, or African art in general.

*UPDATE: a reader informed me about Jean-Pierre Fournier’s analysis of an Akan comb (“Le peigne ashanti et ses mystères”), published Arts d’Afrique Noire” in 1985 (no. 56, pp. 11-14), where Fournier applies the section dorée and rectangle d’or to a comb from his collection.