I recently discovered this incredible field-photo of a famous Cameroon sculptor-king at work. Phonchu Aseh (also written Phuonchu Aseh, Fontshue Ase, Fo Ntshue and Fonchu) became king after the dead of his father Aséh Yufanyi – who was also a sculptor – and reigned in Babanki-Tungo (in the Cameroon Grassfields) until his death in 1918/19. In 1913, the Catholic missionary Johannes Emonts visited him – giving a detailed account of his artworks and sculpting technique in his book Ins Steppen und Bergland Innerkameruns (1927). The foyn (or king) stated that he had learned to sculpt from his father. At first he was specialized in anthropomorphic and zoomorphic (elephant & bird) masks, an old tradition in the region. After admiring the royal thrones in Bamun, he decided to devote himself to the carving of thrones and stools and limited himself to a royal clientele. His reputation quickly grew to such a point that most of the neighboring royal treasuries possessed at least one of his works. Also in further away kingdoms (like Bagam, Nkambé, Fontem, Bafut and Bamun) his work could be found (this wide distribution of works in the Babanki-Tungo style would later become the source of much confusion on the part of researchers when attributing objects to a specific kingdom).

The above field-photo shows Phuonchu Aseh sculpting. On the right a prestige bed ordered by the Bamun king Njoya can be seen. Representatives of Njoya were present when Phuonchu solemnly finished the last details of the bed. Phuonchu would send the bed with a delegation to Bamun, 3-4 days walking from Babanki-Tungo, and in return received several wives from king Njoya. Strumpell collected a similar bed in Babanki-Tungo in 1905, illustrated below.

Typical for Phuonchu Aseh’s well-documented style are almond-shaped eyes embedded in broad eyelids, curved brows which are notched, the oval face narrowed to a point at the chin and unfiled teeth in a half-open mouth. Pierre Harter lists a throne acquired from the fon of Bagam in 1925 by father Christol (currently in the British Museum and illustrated below) as one of the best executed stools from Phuonchu Aseh.

Many of Phuonchu Aseh’s thrones are very alike. The majority of the examples in German museums however lack patina. They were never used and commissioned by German colonial officers. Furthermore, the quality of the thrones and stools is quite uneven since the sculptor-king often entrusted the execution of less important commissions to less skilled assistants.

Several magnificent palace posts are widely considered as the best work of this Phuonchu Aseh. The Ethnographic Museum in Geneva has two; both illustrate palace life: in one we recognize a chief with his insignia, a woman with a small child, and a notable; the other portrays two men and a leopard, with the same basic structure. Less cheerful is the scene represented on a third pillar in the Museum der Kulturen in Basel. The collection records contain the following information recorded by Hans Himmelheber – who brought the pillars back from Africa in 1937: ‘Pillar from the reception hall of the king of Babanki-Tungo, showing the hanging of a man who seduced one of the king’s wives’. The executioner’s heads are turned away from the viewer. 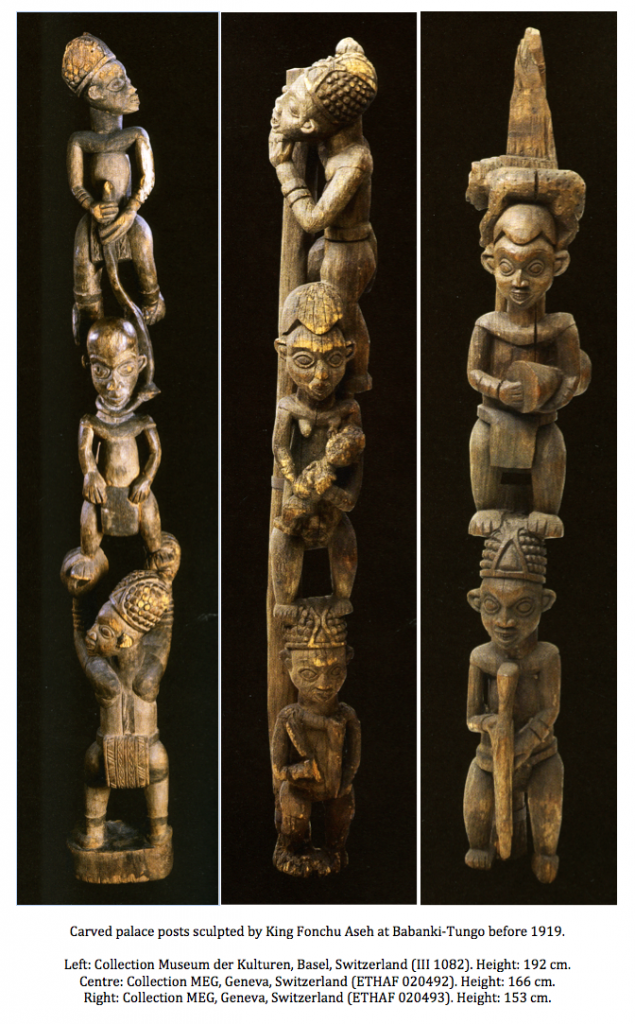