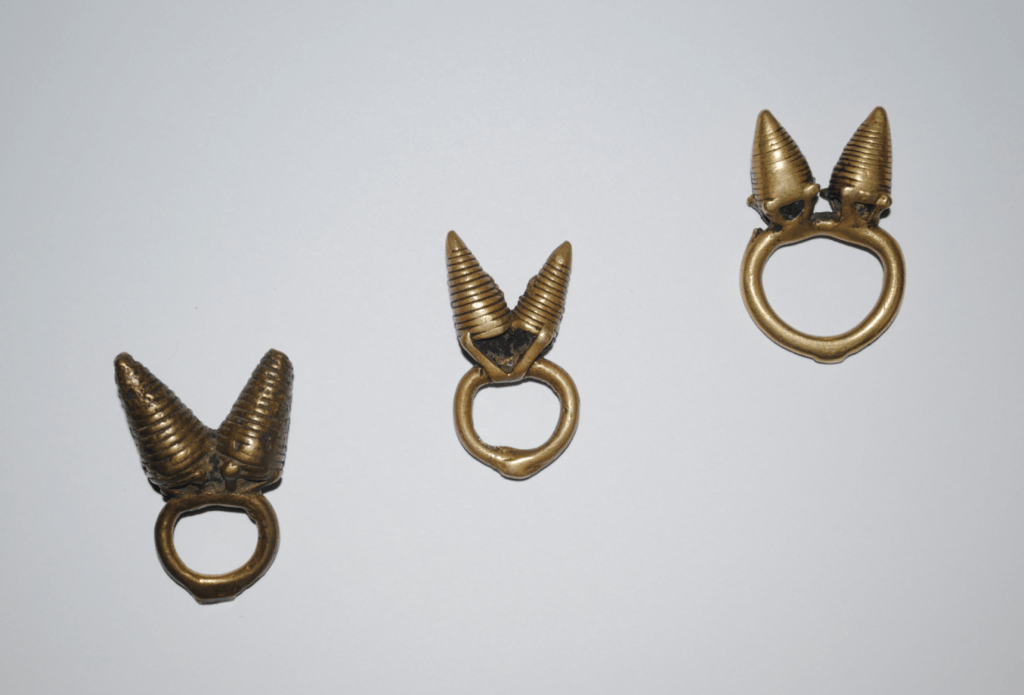 Pendants? Yes, pendants! Commonly referred to as rings – even by the Metropolitan – these are in fact pendants. They were strung on a cotton band and tied around the waist by women during dance performances. Sometimes there were more than thirty on one belt. While they used to be quite easy to find, they are becoming much more rare nowadays, even generating a production of poorly made copies.

Opinions of what the two cone-like finials represent vary. The most common answer is that these ‘rings’ were symbols of fecundity, representing the breasts of a woman – ‘titty ring’ being used as a colloquial name. Others refer to the breasts of goats or cows. One source state that the form is based on the antlers of antelope masks (walu). Some say the resemble the typical shape of traditional Dogon granaries with pointy roofs. Or, as an informant said to André Blandin (quoted in Bronzes et autres alliages, 1988, p. 37): “I do not know what it represents, but it is part of the beauty”.

The three pendants above I received as a gift from Guy van Rijn; one for me, one for my wife and recently (this fertility object clearly doing its work) another one for our son. We use them as keychains. Since our son doesn’t have keys yet, his – the left one – has still the same color as when we got it. My wife keeps her keys in her purse, so her pendant (in the middle) only got a bit of patina, while my example (on the right) is always in my pocket. After three years the brass got very shiny again with lots of wear on both cone’s incisions and a smooth patina. File as: ‘experimental African art research’ 🙂