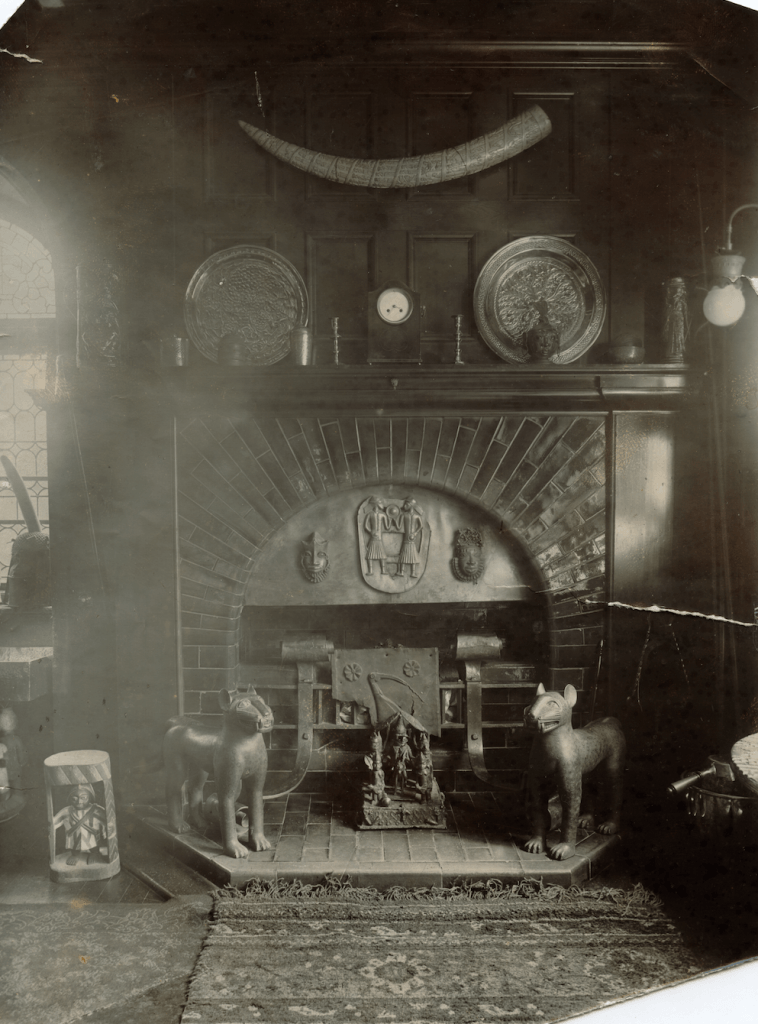 Ben Hall recently found the above interior photo on a Brighton flea market. Talking about a room full of treasures. It appears to be a rare picture of the interior of George W. Neville’s house in Weybridge. Neville (1852-1929) worked for Elder Dempster, a shipping company, in Lagos. After his death, Neville’s collection (128 objects big) was sold by Foster in London on 1 May 1930, the auction was titled Highly Important Bronzes, Ivory & Wood Carvings from the Walled City of Benin, West Africa (G.W. Neville Collection from Benin Punitive Expedition of 1897).

So, where are these objects now ? The pair of Benin bronze leopards are in the National Museum in Lagos, Nigera. They were bought by Charles Ratton in the 1930 auction. Louis Carré acquired them from Ratton after the famous exhibition at MOMA in New York in 1935 and in 1952 they were bought for the new National Museum in Lagos. The plaque with the two Portuguese soldiers is currently in the Musée du quai Branly (#70.2002.4.1) in Paris after passing through a number of hands (Ratton, Carré, Pleven) since Neville owned it. Lastly, the bronze altar between the leopards is in the Fowler Museum in Los Angeles (X65-9088), having been given to them by the Wellcome Institute.

With thanks to Ben Hall, Tim Teuten, Hermione Waterfield and Susan Kloman for the excellent sleuthing – remember this picture came without any contextual information. Still unaccounted for are the big head on the windowsill on the left, the Benin plaque with the bird, the two hip ornaments on the chimney, the ivory tusk and the Yoruba stool.