The above object, possibly a ritual double spoon, reportedly comes from Congo. Where exactly is unknown to me. If you have already seen an object like this before, or have more information about its origin, please do get in touch! Thanks.

UPDATE: a reader has suggested Kuba as the origin of this double spoon. Personally, I have seen similar fixation twigs on Kuba cups, so he could be right.

UPDATE 2: I got a very interesting reply from Boris Kegel-Konietzko from Hamburg.

Dear Bruno, in 1955-1956 I traveled in the Mweka territory (Kasai) and neighboring areas to collect ethnographic objects. I had very good relations with the Kuba living there and was able to collect many boxes, cups, pipes, textiles and masks of various types. Many of the smaller utensils were provided with a a similar suspension device as the object shown here: liana fibers (lukodi) and a kind of flat-curved hook made from a palm rib. With this hook, objects could be attached to the hut wand, out of reach of mouses. This type of suspension is typically Kuba.

I don’t think this object is a spoon. Since one half would be spilled, when filling the other half. In my opinion this is a ceremonial dinner dish, which could have served as the double drinking cups for simultaneous use by two people during ceremonies.

That solves the mystery ! 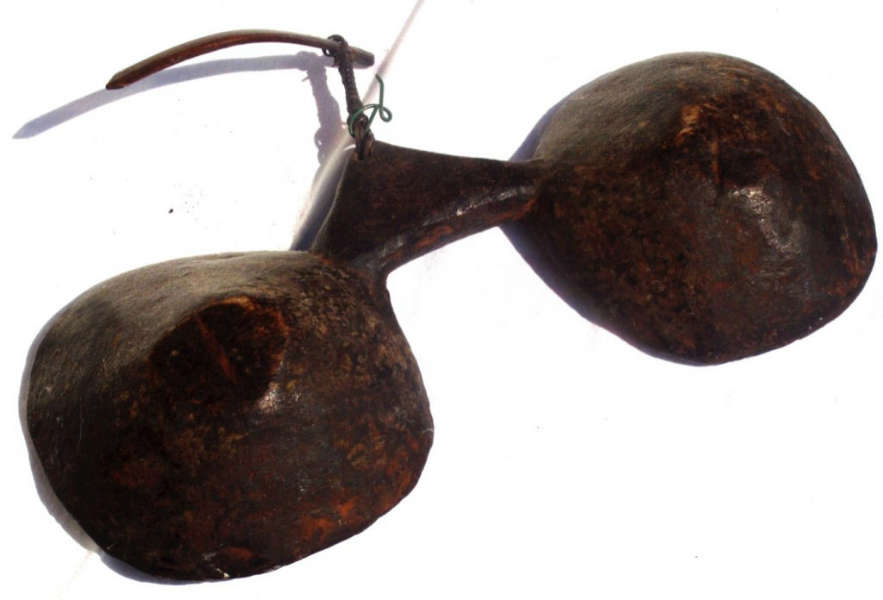 One reply on “Mystery object of the day: a Congolese double spoon”

[…] them back after a while. Two examples: a reader informed me about the origin of the mysterious ‘double spoon’ and I finally found a picture of the two bronze objects returned to Benin earlier this […]