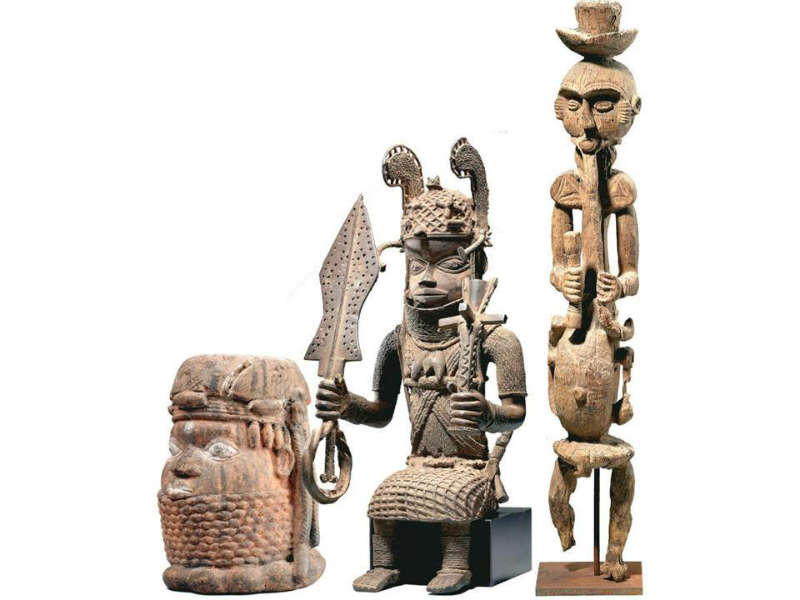 Eight Nigerian artifacts that were probably stolen decades ago and illegally sent to the United States have been returned to the West African country by the Museum of Fine Arts. The decision to return the artworks was the culmination of an 18-month provenance research project by MFA’s Victoria Reed. Along the way, the MFA discovered that one item, a brass altar figure, had probably been stolen from the royal palace in Benin City as recently as the 1970s. All of the works were purchased by William and Bertha Teel, longtime supporters of the MFA, whose 2013 bequest gave the museum more than 300 works. Read more about the story here. For pictures of the 8 returned objects click here. Besides the Benin figure, the group include two Nok terracotta figures and a terracotta Ife head, archaeological materials that are known to be at high risk for theft and looting. It also includes an ekpu, or ancestral figure dating to the 18th or 19th century, which was part of the collection of the Oron Museum, near Calabar, Nigeria, as late as the 1970s. Two terracotta heads produced in the Kingdom of Benin and a group of Kalabari screen figures appear to have been illegally exported.

In 2012, the MFA received 28 bronzes and six ivories from the Benin Kingdom from the Robert Owen Lehman collection (info). Not long after this announcement, Nigeria’s National Commission for Museums and Monuments demanded the return of all these objects stating they were looted during the Benin Massacre of 1897 and illegally taken by the British Expedition as spoils of war (info). I don’t know how this was settled, but it looks like the MFA rather starts with the Teel donation, before going into Lehman’s gift.

UPDATE: some additional information about the origin of the 8 objects (found here):

Teel had bought the eight restituted pieces in good faith, five of which he acquired from the Davis Gallery in New Orleans. The two oldest are Nok terracottas, around 500BC to AD200, which came from the Davis Gallery and the Brussels dealer Marc Leo Felix. An Ife terracotta head dates from the 12th to 14th century. A Benin bronze ancestral altar figure, a fairly modern piece dating from 1914, was found to have been stolen from the royal palace in Benin City in 1976. An Oron ancestral figure, 18th or 19th century, was discovered to have gone missing from the Oron Museum, near Calabar, at some point from the 1970s. Four of the pieces were accompanied by forged Nigerian documentation. Nigeria’s National Commission for Museums and Monuments has not yet announced where they will go on display.