An error often made in the trade concerns the attribution of the above type of figures. They are often mistakenly listed as Montol, or even Chamba. In fact, they originate from the Angas (Ngas), the largest ethnic group on the Jos Plateau and neigbours of the Montol. They are situated in the Eastern escarpment of the Jos-Highland Plateau. It’s an easily recognizable style, clearly distinguishable from the more chunky Montol iconography. It was Barry Hecht, a renowned collector of Nigerian art, who informed me about this general misconception. Martial Bronsin confirmed this attribution to a private collector from Brussels. Most likely these figures were used in a context similar to the Komtin cult from the Montol. In Central Nigeria Unmasked, a book discussing Middle Benue sculpture, not a single reference to the Angas can be found. For now, I haven’t been able to find any relevant literature. Any further information about this type of sculpture is thus very welcome.

An object you don’t often come across at auction, a talking drum from the Yoruba. The above example was acquired in the palace of the Oba of Oyo in the early 1960s and will be sold by Dorotheum next month; more info here.

In case you were wondering how they sound… (trust me, you’ll be amazed by the sound they can produce)

Discussing the sale of the Jan Krugier collection (info), journalist Scott Reyburn from the NY Times just coined a new term: the nostalgic premium (source). This is the extra money buyers are wiling to pay for works that emerge from “connoisseurial” collections. This term sprang forth in a recent discussion (here) concerning the unpredictability of art prices and the risks of art investment. The nostalgic part refers to the period in time when collectors were still shaping the appreciation of art and were less pre-occupied with the financial aspects. This nostalgic premium is of course a notion that has been known for a long time in the African art world. Especially the auction houses (who love premiums altogether) have been very aware of the positive effect of a famed provenance on prices. Most recently the Sotheby’s sale of the Stone collection (info) and Christie’s sale of the Bartos collection (info), with multiple pages in the sale catalogue dedicated to the biographies of the collectors, prove they know how to use the nostalgic premium to their advantage. But also in galleries, this premium is widely added to the normal price. Personally, I don’t think an object gets any better once having been in this or that collection, it adds nothing to the inherent strength of a piece – but that’s another multi-faceted discussion.

In case there’s nothing worth watching on television, you can always watch this lecture from Dr. Herbert M. Cole (Professor Emeritus of the History of Art, University of California, Santa Barbara) speaking at the Williams College Museum of Art (Massachusetts) about Nigerian art.

On 4 & 6 March 2014, Sotheby’s London will auction the private collection of the late Stanley J. Seeger. The sale is called “1000 ways of seeing“, so the cyclops illustrated above fits wel in (info). It’s attributed to the Fon, which is of course quite a stretch since cyclopes belong to ancient Greek mythology.

UPDATE: A reader informed me this figure might also have been inspired by a deformed one-eyed baby.

For a nice article about Stanley Seeger click here. 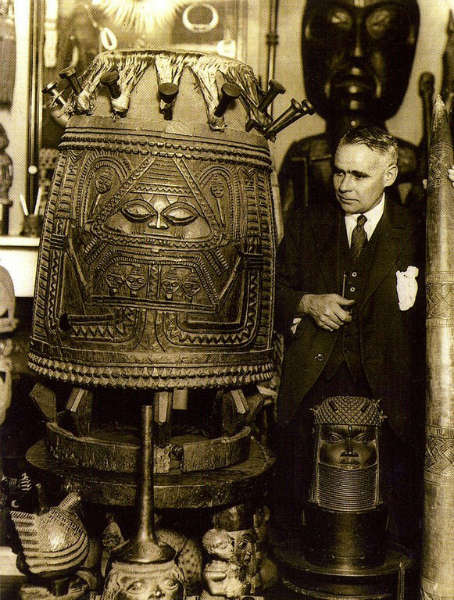 A rare video documenting the famed collection of William Oldman (1879-1949) in London. This film, uploaded on Youtube by Kevin Conru, was edited using Oldman’s personal 16mm print copy and shows rooms packed with carvings, weapons and other art objects squeezed into every available space.

This spring, 26 Parisian galleries participate in a new event called Paris Tribal. It’s clear that in order to compete for the attention of collectors, galleries are creating more and more events like this. The rapid growth of such happenings is changing the way galleries operate on a substantial level. As we can read in the press text, most participants prepared a thematic exhibition. In the short period of 4 days, they of course hope to make significant sales. A combined marketing budget, should be able to lure many visitors. Apparently, this event is also a bit about positioning. On the website, we read that Paris Tribal “confirms Paris as capital of tribal arts“. I’m always suprised by this nationalistic reflex in the globalized world we live in today, but I guess competition is stiffer then ever. Anyhow, it sounds like a great excuse for a trip to Paris.