Above a Baule mask that will be sold by Christie’s New York on 4-5 November 2013. Forming part of the A Dialogue Through Art: Works from The Jan Krugier Collection sale, the mask is expected to fetch between $ 500,000-800,000 at auction. Published in Rubin’s Primitivism in 20th Century Art. Affinities of the Tribal and the Modern (p. 360), it belonged to André Breton before arriving in the hands of Pablo Picasso. It was inherited by Marina Picasso, who later sold it to Jan Krugier (1928-2008) – once the world’s foremost Pablo Picasso dealer. Read more about his life and the sale of his collection here.

Highlighting the African art of Jan Krugier’s expansive collection is a Baule mask that has come to be known the Krugier-Picasso mask in honor of two of its proud owners, Krugier and Picasso. Nowhere in the genesis of the Modern Art movement at the beginning of the 20th century is the profound influence of African art more apparent, powerful and consistently resonant than in the work of Picasso. This mask is a transcendent force of sculptural energy, with a vibrancy so apparent as to rival Picasso’s most famous muses. Picasso’s Les Demoiselles d’Avignon (1907) clearly and famously defined the mask association, which he then powerfully harnessed as a constant motif in nearly every aspect of his œuvre. Based on the strong plasticity of the mask, its appeal to André Breton, another owner of this work, and later Picasso is evident. Here the image of a bushcow is transformed into an architectonic state – imposingly rectilinear and yet full of expansive movement. The semi-circular mouth with pointed tongue appears in several of Picasso’s paintings, most notably Guernica (1937), where tortured bovines tangle with human figures. The Picasso-Krugier mask thereby represents a major axis upon which much of Picasso’s work revolved – the abstraction of African art itself, the mask and the bull. 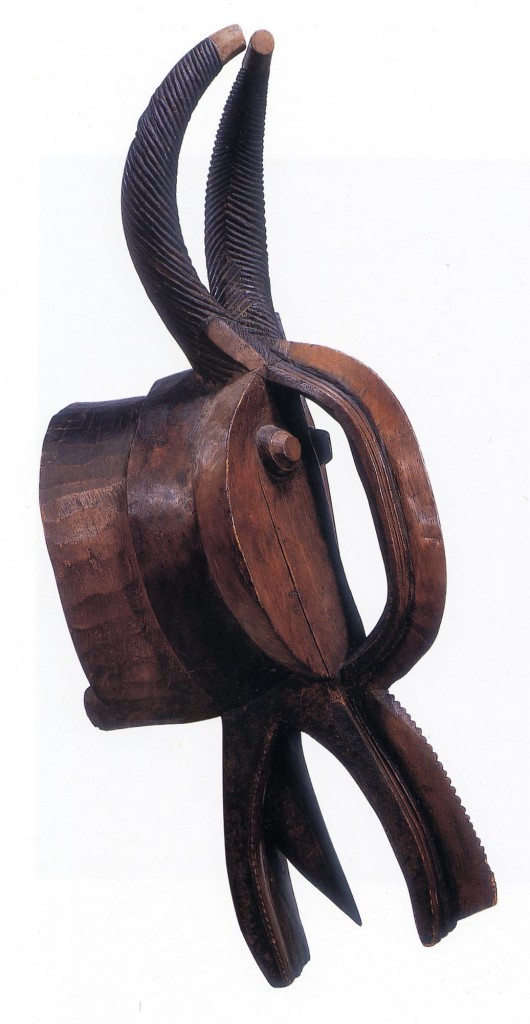 One reply on “The Krugier-Picasso Baule mask”