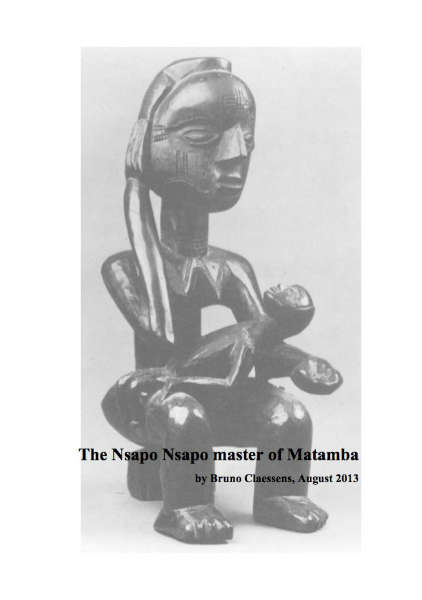 My latest research project, a 27 page long study of a Nsapo Nsapo atelier.

This mother-and-child figure orginates from the most profilic Nsapo Nsapo workshop known. The founder of this atelier lived in a mixed Songye-Luluwa region where he created his own unique style that borrowed features from both the Songye as the Luluwa. Together with the Nsapo Nsapo, this sculptor lived on the Matamba hill where he arrived in 1887 . After leaving their homeland, the Nsapo Nsapo were detached from their own traditions and came under new cultural influences. These were not only African, from the Lulua and Chokwe, but also European – with a mission and an army post in Luluabourg (now Kananga) only a couple of kilometer away. Freed from his old cultural context, our artist could give free rein to his imagination and accede to the demands of the market, both local for traditional use as colonial for the Belgians in Kananga. The following types of figures from this workshop are known: standing figures, seated mother-and-child figures, figures seated on a bench, musicians (more specifically drum players), figures smoking a pipe and squatting figures with the hands to the face. This diversity of subject is a rare characteristic for an artist in this region and proves how masterfully he handled the adze. Probably the more anecdotical figures were made for the Belgians.

The Nsapo Nsapo left Matamba again by 1925; probably the sculptor of the figure under discussion here was already deceased at that time. Timmermans discovered that he orginated from a Katuambi group and that his family lived between Djibu and Lupaka after 1925. In the impossibility to discover his real name, Marc Felix labeled this artist with the pseudo-name “the master of the sitting maternities”; the mother-and-child figures being the most prominent in his corpus. I would opt for the name “The Nsapo Nsapo master of Matamba”, in reference to the hill where he developed his style.

The earliest documented figures from this workshop arrived in Belgium in October 1912 and were donated to the Royal Museum for Central Africa in Tervuren. They were collected by Emeri-Henri-Célestin Cambier (°1865 – †1943), who arrived in Luluabourg on 14 November 1889 and founded the Mikalaye mission that same year. The Museum Aan de Stroom in Antwerp owns 4 figures from this atelier (one maternity and three male figures); all of them were purchased from Henri Pareyn on 13 April 1920.