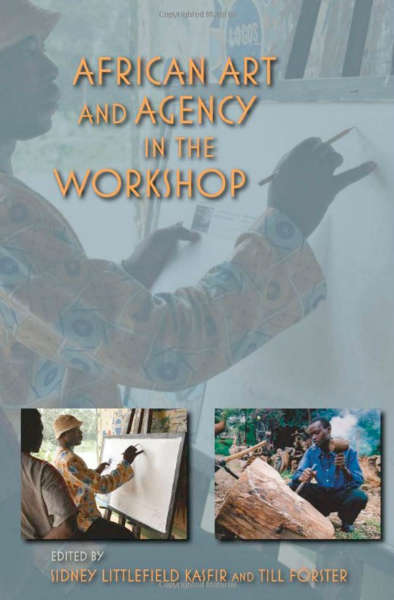 A newly published book under the supervision of Sidney Littlefield Kasfir and Till Förster, African Art and Agency in the Workshop (Bloomington: Indiana University Press, 2013, 410 pp) presents fifteen essays by a variety of scholars that explore the importance of the workshop in relation to the creative agency of its members and its interactions with patrons. While in the last years the research of “master hands” and ateliers had been mainly confined to the market segment of the African Art world, I am happy to notice the academic world is catching up.

The workshops under disscussion in this book range from the 19th century (King Lewanika’s at Victoria Falls) to the contemporary (Triangle workshops in Zambia and South Africa) and from the earliest modern (Grace Dieu Mission in South Africa) to reassessments of the famous and controversial (Ulli and Georgina Beier at Osogbo, Frank McEwen and Joram Mariga in Zimbabwe). They also include two instances of revolutionary patronage (Makonde cooperatives in Mozambique after FRELIMO’s victory and Kulibele (Senufo) sculpture in Korhogo after the 2002 Côte d’Ivoire rebellion which left them in rebel-territory). These are augmented by a stand-alone introduction examining both well-known European (Lucas Cranach the Elder, the Bauhaus) and African workshops and the intersubjectivity of their practice, the modes of imagination employed, as well as the social and economic aspects of production. The collection ends with a reprint of an essay from a 1985 Iowa conference on ‘The Artist and the Workshop in Traditional Africa” followed by a Coda discussing the major changes that have taken place in workshops since that time due to politics, urbanization, changes in patterns of consumption, tourism, and large-scale economic changes.

Quoting Allen F. Roberts (University of California) in his review:

“Mozambican freedom fighters direct artistic cooperatives to anti-colonial ends. An entrepreneurial Zambian king “brands” his people through patronage of distinctive visual and performance arts. These and equally compelling case studies demonstrate how African workshops have long mediated collective expression and individual imagination. In their nuanced contextualization of “the workshop” across cultural, geographical, and temporal diversities, the editors frame apprenticeship, cultural constructions of creativity, pragmatic materiality, and phenomenologies of production as no Africanist art historians have before, and in ways applicable anywhere in the world.”

The table of contents does looks promising.

Rethinking the Workshop \ Till Förster and Sidney Littlefield Kasfir

3. Masters, Trend-makers, and Producers: The Village of Nsei,
Cameroon, as a Multisited Pottery Workshop \ Silvia Forni

7. Working on the Small Difference: Notes on the Making of
Sculpture in Tengenenge, Zimbabwe \ Christine Scherer

12. “A Matter of Must”: Continuities and Change in the Adugbologe
Woodcarving Workshop in Abeokuta, Nigeria \ Norma H. Wolff

13. Work and Workshop: The Iteration of Style and Genre in Two Workshop
Settings, Côte d’Ivoire and Cameroon \ Till Förster

The book is available here.