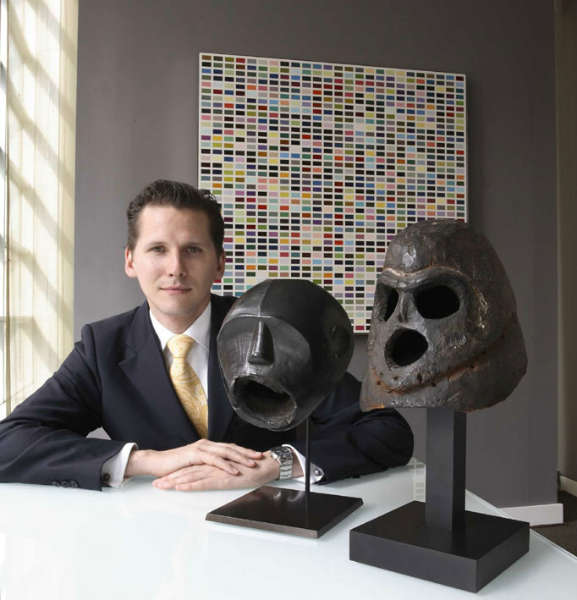 Last December, Michael Auliso published a very informative interview with Sotheby’s NY’s Department Head African & Oceanic art, Heinrich Schweizer, on his website. This 10-page interview (at least if you print it) is a must read. It offers a rare glimpse of one of the keyplayers view on the current state of the African art market. The first few questions concern Schweizer’s personal story. A second part treats his first years at Sotheby’s, explaining the change he helped effectuate at the Department and the early signs of the giant leap the market would soon take.

Spring 2007, we presented the Saul and Marcia Stanoff Collection together with a few masterpieces deaccessioned by the Albright-Knox Art Gallery in Buffalo. This auction broke all records and generated $25 million – half the sum that the Vérité sale had totaled but with only one quarter of lots. That sale of May 2007 was the true turning point in the market, marking the beginning of a new era. The quality of the works on offer was so great that it attracted the interest of art collectors outside the African and Oceanic art field, who, for the first time, entered the market on a broad front. Our cultivation and continuous expansion of this collector group led to the reassessment of the top of the market in our category that we have been witnessing in the last five years up through today.

Following a praiseworthy denouncing of the usage of the terms ‘primitive’ and ‘tribal’ (daring on a website called Tribalmania), Schweizer explains this evolution further.

I think that the art market in general in the 21st century is becoming less compartmentalized by regions or categories of artworks. There is one category that everybody wants: the universal masterpiece, the artwork that defies categorization and transcends regional styles and eras. Once you are discussing such an artwork, it doesn’t matter whether the work is African or Oceanic, 500 years old or 50 years old. We’ve seen a number of such works in the past two years going for very strong prices at auction. One great example would be our Hungana Ivory Pendant which we sold in Paris last year (December 14, 2011, lot 64). It had an estimate of 30-50,000 Euros and was sought-after by a dozen of bidders, eventually selling for over one million dollars to a client who was bidding with me on the phone. It didn’t sell for that much because it was an “ivory” or a “miniature”, or an “amulet” or “Congolese”. Of course it could be categorized in all those terms, but it was much more than that. In the end it sold for an outstanding price because the artist had created a sculpture that carried so much dignity and spirituality that it became accessible to a very broad audience reaching far beyond the limits of the traditional African Art market.

.. with prices going far beyond the regular limits too!

The current market shows a clear, strong interest in top quality artworks from canonic African styles, especially those that are well-documented by virtue of their inclusion in important publications and exhibitions. If you go back 30 years, auctions were much larger, often comprising between 300 and 400 works of mixed quality. Back then, knowledgeable dealers would sometimes come to the auction to advise their clients, but mostly to pick out the best works for themselves. Today the auction houses are selling directly to the world’s most important collectors. It is a big change.

Which is totally correct. I know many older collectors who have never bought at auction, while almost all younger collectors regularly attend sales. The opposite is true for dealers. Where many nowadays claim that auctions are too expensive,  they used to score at least a part of their inventory there.

Subsequently, Auliso asked the question that has been on everybody’s lips the last years: Some of my dealer colleagues have the perception that Sotheby’s is consciously taking away their clients, thus hurting their business. Your thoughts on that notion?

Schweizer: I strongly disagree with this idea because it is not well-informed. The truth is that the international auction houses are persistently producing new collectors. We are introducing people to African and Oceanic Art who could never have imagined they would be attracted to this field. I would say that 50 percent of our clients have been in the market for 10 years or more, and 50 percent have joined the market more recently. Many of the newer collectors have developed a great passion for this field. Newer collectors often start out at auction because they appreciate the level of expertise, compliance standards and transparency of pricing. But with time they gain confidence in their own judgment, start going to fairs and venture into the gallery world where they also start buying. In the end, these new collectors strengthen the market and everyone benefits.

Unfortunately the taste of these collectors is a bit high level for most galleries of course. Another argument would be the current state of the economy. Historically, during recession, auction houses have always done better than dealers.

The last part of the interview deals with the creation of “The African and Oceanic Fine Art Market”, created for new eclectic collectors with deep pockets.

The massive participation of seasoned fine art collectors in our sales is consistently producing new records at Sotheby’s. A fine art collector spending 20 million dollars for a European Master has usually no problem placing a 200,000 dollar bid in an African and Oceanic art sale even if this means 100,000 dollars more than a previous record.

If you as a seller want to capitalize on the difference between the traditional market and the new market, you are best advised to use Sotheby’s as a “bridge” where your property can walk from one side to the other.

This should explain the unprecedented openess shown in this interview. We’ve learned a lot about Heinrich Schweizer, Sotheby’s last decade’s evolution and their view on the market, but in the end they are – as are all dealers – always on the hunt to find great pieces. And one could thus contextualise this interview as an open sollicitation to have your objects sold by them, preferably the masterpieces of course.