A quick service notice: I have created a special page on my website (here) grouping all my blog posts about African artists. ‘Masterhands’ unites my identifications of previously anonymous carvers, as well as posts about known sculptors and master sculptors or workshops established by other scholars. It is still a fairly short list, but in the long run I wish to create a substantial index of African artists on this page.

Note that Sotheby’s Paris will be selling a Teke figure by The Master of the wedge-shaped beard (who I identified in March) later this month; read all about it here. In French his pseudo-name translated into le Maître de la barbe cunéiforme. 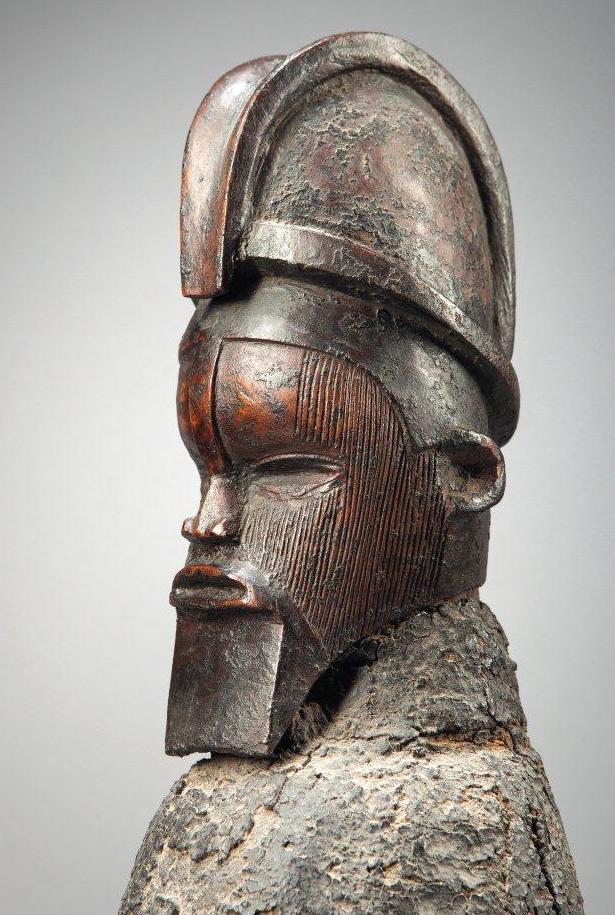 Teke figure by the Master of the wedge-shaped beard. Image courtesy of Christie’s (11 December 2014, lot 52).

The above Teke figure was sold last year by Christie’s in Paris (info). Besides the fact that it was exhibited during African Negro Art at the NY Museum of Modern Art in 1935 (consigned by Stephen Chauvet), it was clearly created by a master carver. Although Christie’s catalogue note did not mention other Teke figures by this artist, I was convinced there would be more works by this talented sculptor out there. That this would be the only figure known from this hand (in a well-developed personal style) would have been surprising. A first stop was to consult the book on the subject: Raoul Lehuard’s Les arts Batéké. He published this figure as ‘type 43’  (p.307, fig. 43.1.1) and wrote that the Musée d’Ethnographie de Genève held a statue by the same hand still completely covered by offerings (below on the left). In all likelihood the head of the Chauvet Teke once also was covered with offerings and cleaned when it arrived in Europe – not uncommon at the time. 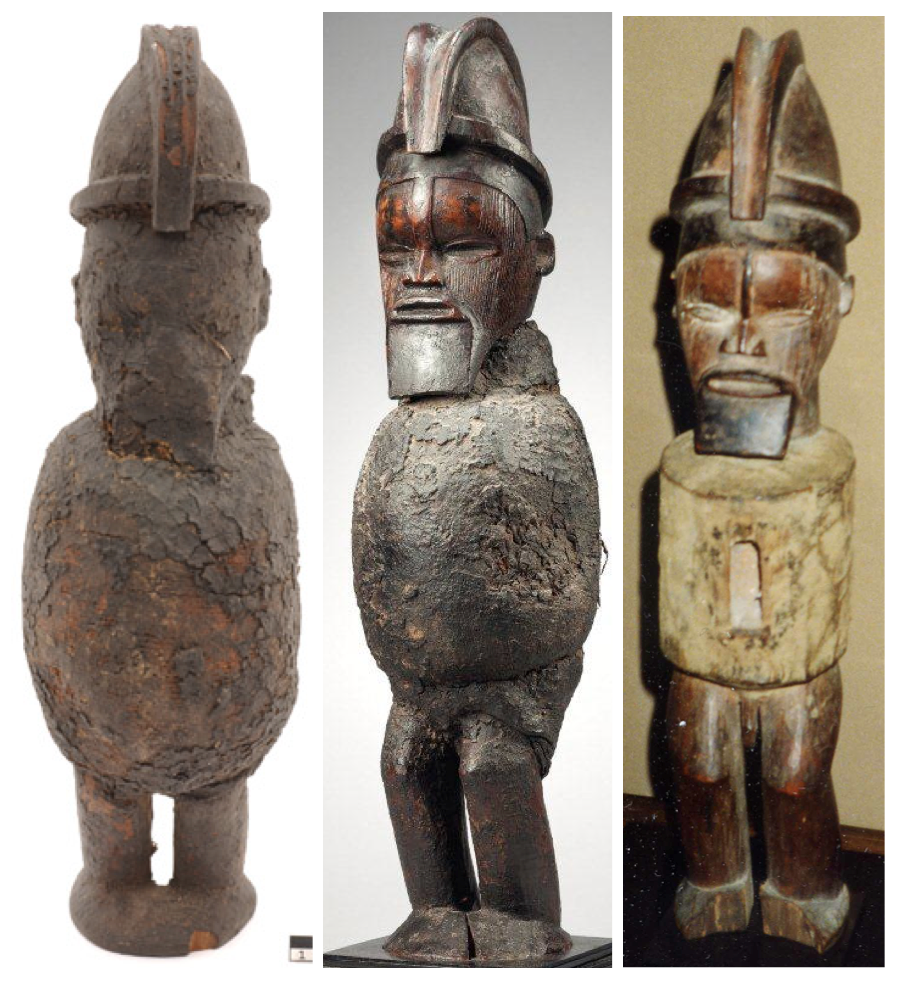 A third figure from this carver (on the right above) was photographed by Guy van Rijn in the early 1990s at a Belgian dealer. Completely stripped from its attachments, it gives us the opportunity to see how the sculpture looks beneath the packed torso. There is a small additional cavity, created by the sculptor to accomodate the initial charge of the figure, and no arms were sculpted (they would be covered anyway). The above picture thus gives a good example of the different stadia of ‘cleaning’ that often took place after such statues arrived in the West.

With these three figures, it became possible to identify the essential morphological characteristics that define the work of this master carver: the narrow wide slit eyes, the shape of the nostrils, the jawline that flows into the beard, the shape of the beard (sitting directly under the mouth), the circular line that separates the beard from the part of the face covered with vertical scarifications, the C-shaped ears and the shape of the base with no feet (although there is an open space between the two ‘feet’ at the back). Furthermore, these three figures all had the same double-lobed coiffure (called mupani according to Lehuard).

Not much later, a fourth figure from this sculptor was discovered in the collection of the Tervuren Museum (illustrated below). While the figure has a different coiffure, the eyes, nose, mouth and beard are clearly the work of the same sculptor – although Lehuard lists this figure as ‘style 53’ (and not 43!). 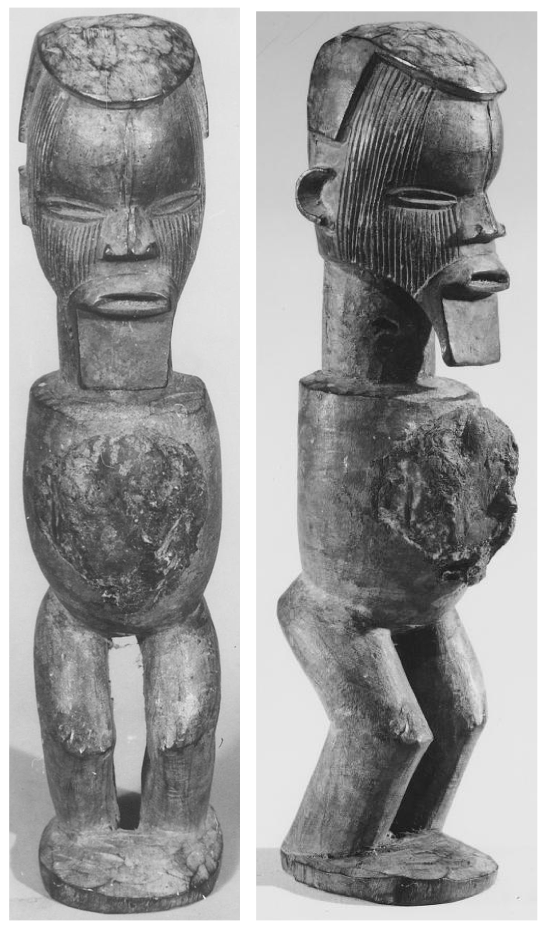 Discussing the notable features of the Chauvet figure with its new owner, its wedge-shaped beard was concluded to be the identifying morphological element of the work of this artist. I have thus chosen to call him ‘The Master of the wedge-shaped beard’.

One of the icons of Teke statuary, another figure in the collection of the Royal Museum for Central Africa, probably also was made by this master carver. While Lehuard lists this figure as ‘type 10’, it does has the same nose, mouth and wedge-shaped beard. Just as the Chauvet Teke, the upper end of the C-shaped ear flows directly in the line separating the coiffure from the face, a small but significant detail (cf. my post about ears). 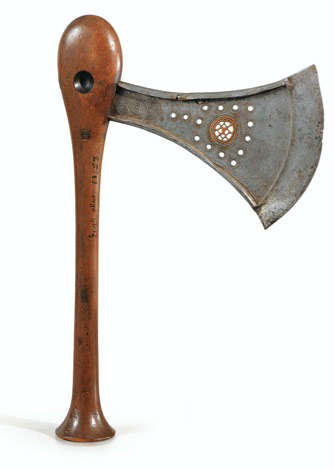