The next Native auction in Brussels features a rare Ga’anda shrine vessel from Nigeria.

This terracotta vessel came on the market in NY in 1999 together with a very similar example. The current owner acquired this one and suggested Robert Rubin to acquire the other*, which he did. (*sold by Sotheby’s in 2010)

Possibly, both figures thus once belonged to the same shrine. Marla C. Berns in 1989 wrote an excellent article on these vessels and the ceramic art in the Gongola valley. This article contains some wonderful field-photos of such shrines.

Mbirhlen’nda is the spirit, regarded as best able to protect and sustain health and prosperity. The dense application of small clay pellets on mbirhlen’nda may be sculptural equivalents of the rows of raises “dots” resulting from scarification incisions. However they may more literally refer to the skin diseases the spirit is said to inflict on those who disobey codes of Ga’anda behaviour and morality. Like ngum-ngumi, mbirhlen’nda protects Ga’anda civilisation.

Part three of Central Nigeria Unmasked. Arts of the Benue River Valley goes into more detail on the sculptural ceramic vessels of this region. Read more about it here or watch a slideshow with more fieldphotos of Marla C. Berns here.

The next Zemanek sale features a rare Kanyok bowl bearer from the Kanda-Kanda workshop. 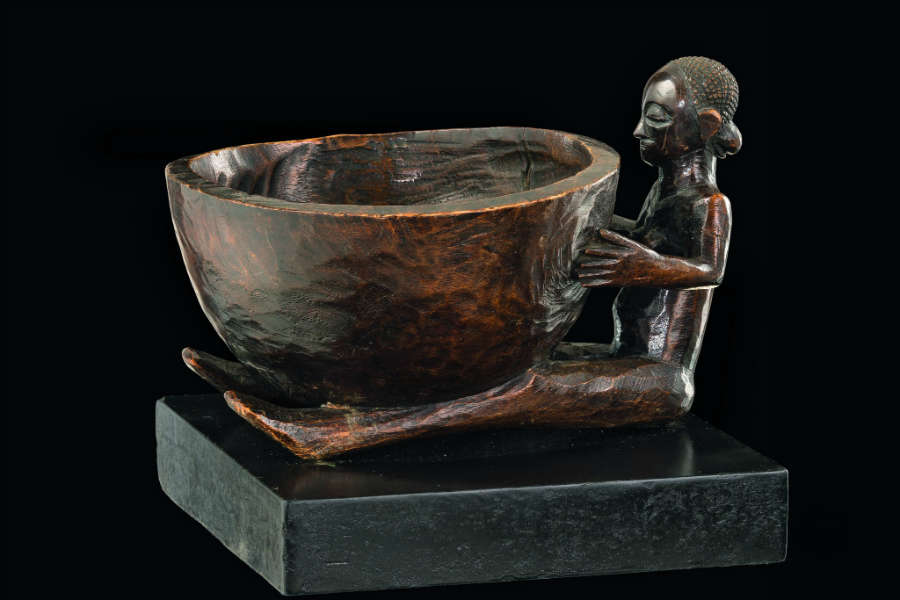 This seated bowl bearer (kabila mboko) can be compared to similar examples in the collections of the Ethnologisches Museum (SMPK), Berlin (collected by Frobenius in 1904) and MRAC (acquired before 1918). 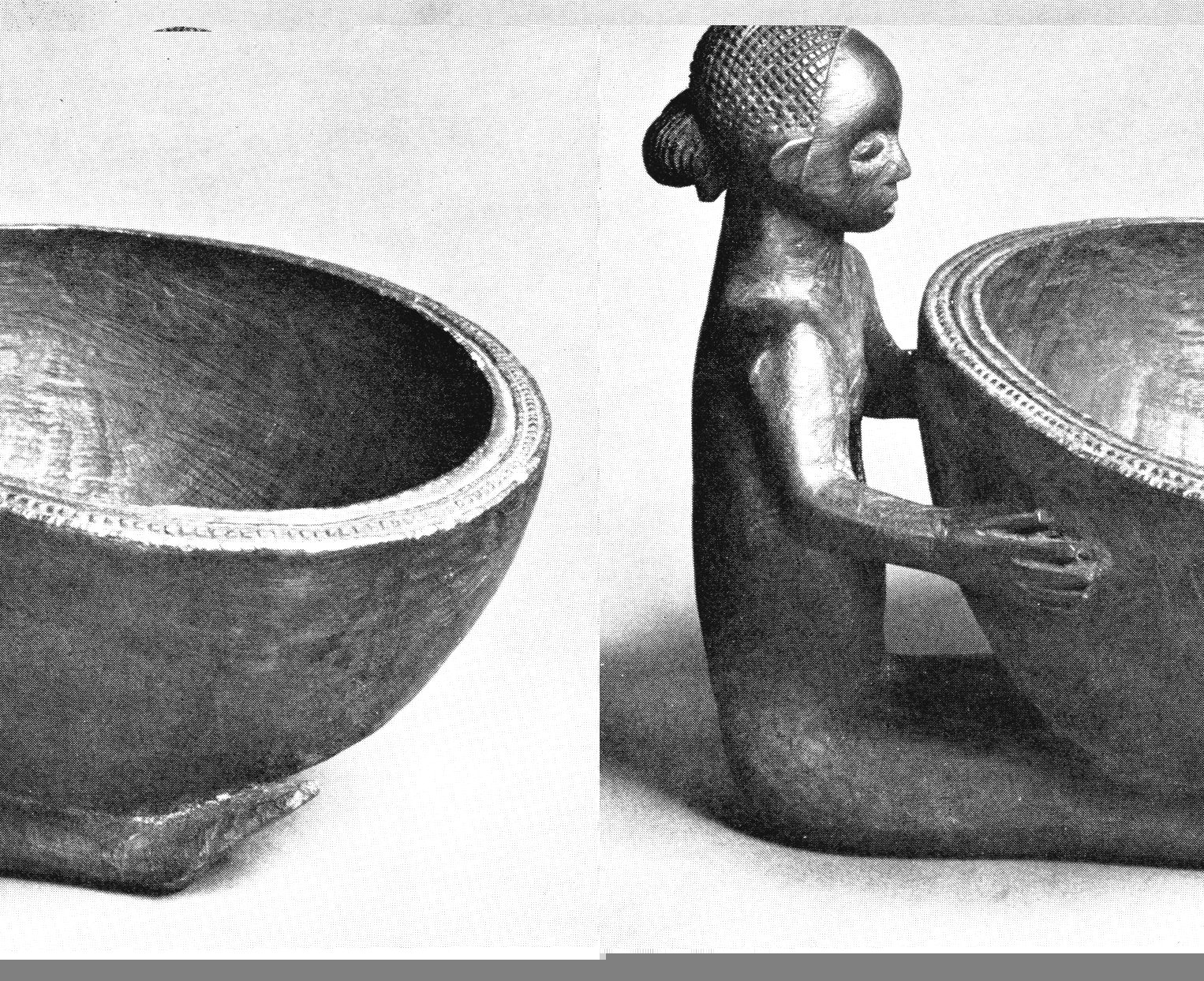 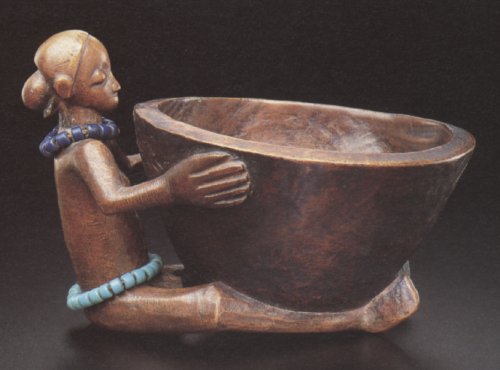 In November 2006, Sotheby’s NY sold a a rare couple from the Kanda-Kanda workshop from the William Brill collection for $ 273K. The auction catalogue featured a very interesting analysis of this particular style by Rik Ceyssens:

The style of the Brill Kanyok couple historically has been categorized as a ‘substyle’ largely concerning wood sculpture coming from Kanda-Kanda, a colonial administrative post situated in the northern outskirts of the Kanyok kingdom. This assumption was based primarily on some of the early writings of Frans Olbrechts who saw Kanyok works of art as a regional offshoot of the large-scale and far-reaching Luba style. However, his conclusions were based on a morphological analysis, rather than actual field information. Later, in 1955, Bert Maesen, Olbrecht’s former assistant, and by this time curator at the Tervuren Museum, was one of the first to do substantial field work in Mulund and in Kaatshisung, two political centers in Kanyok territory.

The earliest first-hand 19 century information on Kanyok art is based on the Michaux expedition (February–August 1896). After visiting the Luba and Ruund capitals successively, he traveled north, traversing Kanyok land and acquiring artifacts. The members of the expedition stayed in Kanda-Kanda for four days (May 22 until May 26). At this time, Oscar Michaux collected some of the most cherished Kanyok treasures in the Tervuren Museum, but none in the so-called Kanda-Kanda style.

In 1902, the Tervuren Museum received the first Kanda-Kanda style artefact, a ‘chaise pliante sculptée par les natifs de Kanda-Kanda (tribu des Bena-Kanioka)’ sent by Alexandre Pimpurniaux, commissaire de district in Lusambo (accession number EO.0.0.16168) (D.E. 13). Works in the Kanda-Kanda style could pre-date 1902, but this date together with the 1896 Michaux expedition date and collecting information give a relatively strong argument for the beginning timeframe of the Kanda-Kanda style: it was not yet operational in 1896 and fully operational before 1902. Although Maesen did not work in Kanda-Kanda, most of what we know today about Kanda-Kanda art is due to his fieldwork. During lectures on the radio (1967), he mentioned ‘tourist art’ offered at the Kanda-Kanda market, as indicated by archives (Tervuren Museum: R.T.B./Interview). I tried in vain to recover these precious document(s). Possibly, Maesen alluded to a 1950 article in L’éventail about a newly acquired wooden bowl in the Kanda-Kanda fashion (EO.1948.3.1) said to initially have been purchased in 1918 at the Kanda-Kanda market. However, this bowl was clearly used and could have been in the market place in the personal possession of its owner, and not for sale. Informed by Maesen’s research, Cornet dates the Kanda-Kanda “pseudo-style”, as he calls it, to the end of the 19th century (1972: 236–237; 1974: 132–134; 1975: 55). In 1987, Koloss learned from Maesen about a ‘workshop operating in the vicinity of Kandakanda in the first two decades of this [20th] century’ (Nooter and Koloss in Koloss 1990: 64).

Contrary to what may have been supposed based on the thematic choices and stylistic qualities of his work, Kadyaat was not a Chokwe migrant, neither a slave, nor a wandering trader. He was an ordinary indigenous Kanyok, installed as Manindak at a regional court, as a minor dignitary or technician, who never made it to one of the central Kanyok courts such as Mulund or Kaatshisung. He was able to develop his talents in combination with what were already multicultural surroundings in 1897 at Kanda-Kanda and its open market conditions. In addition, the open-mindedness of his first and formal employer, chief Kabw-Mukalang(aa-Seey) stimulated his work. Kadyaat, who died around 1920. His successor at the court of Kabw-Mukalang–Kabuya-wa-Biyombo (Bakwa Tembo, Myabi zone), though good enough as a Manindak, did not excel as a wood carver. 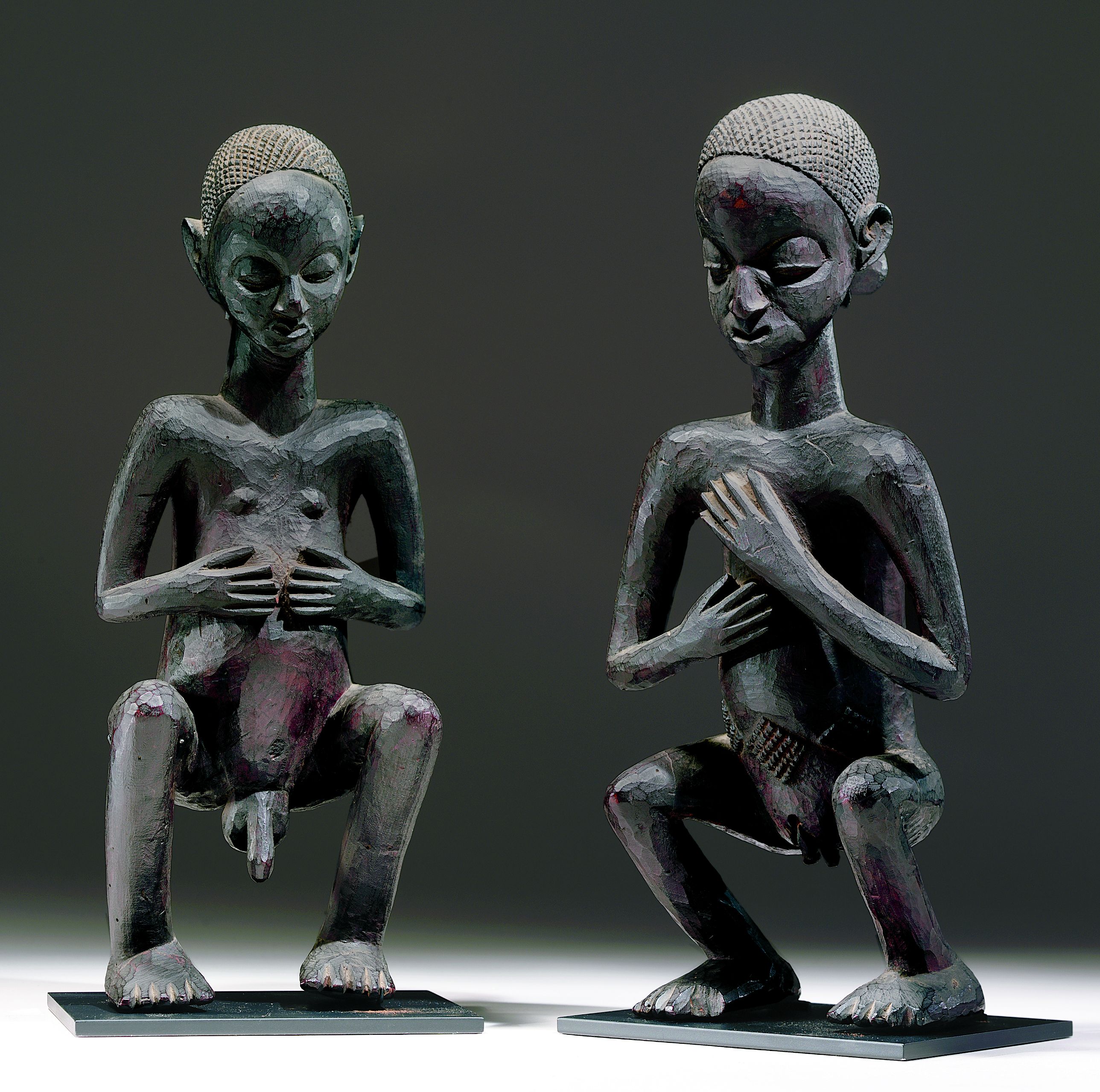 The Brill ‘couple’ is fully representative of Kadyaat’s personal style, and there is nothing “pseudo” about it! The particular bearing, resting in a squatting position, in real life, a relatively frequent one. As seen in Kadyaat’s œuvre, he has an anecdotal mind and in this case, the Brill couple, in the same posture, with their heads tilted at the exact angle and their eyes likewise fixed on the same point, Kadyaat indeed seems to be borrowing from the natural human interactions of his surroundings. At the same time, however, the couple here could be perceived as standing upright, the lower limbs being telescoped, as if seen from above, which is a common device in the canon of Central-African art. Moreover, the unisex coiffure is the Kanda-Kanda version of the traditional mafwifw hair style. The woman’s scarifications on the lower abdomen show that Kadyaat’s œuvre is still rooted in classic Kanyok art: I refer to the splendid caryatid stool collected by Michaux in 1896 (EO.0.0.23478) (Ceyssens 2001: cat. 87). Could it be that the smirking open mouth is Kadyaat’s personal trademark? In fact, some would say, the grin somehow echoes the mouth of Songye sculpture. In my opinion, the wide-open mouth can be retraced more closely to southeastern Kete and even Salampasu influence. In Kadyaat, we see an artist who is working within the artistic canons of Kanyok art, and Central African art in general, but he has chosen to incorporate his own perspective and idiosyncrasies to create a unique artistic sensibility. 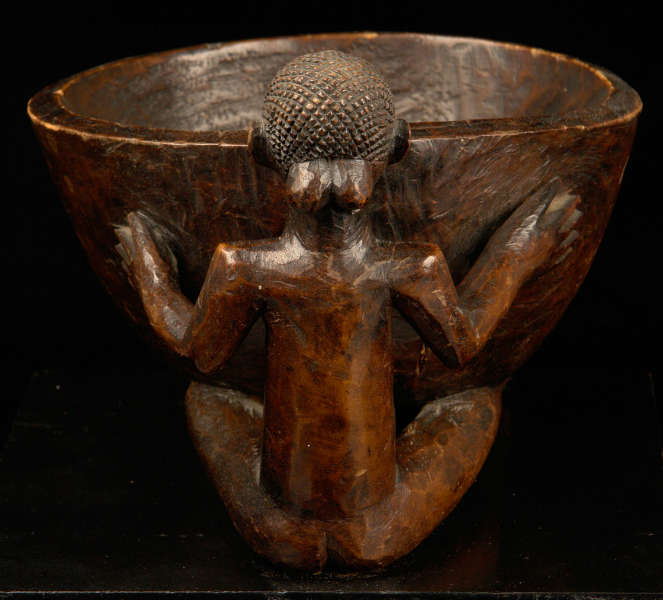 An interesting discovery in a small auction in Paris, a Koro ngamdak headdress from Nigeria.

The Koro make these headdresses for themselves and for the Ham (Jaba), and probably also for the Kagoro, Kaje and Kamantam, as their religion and art are rather similar. The mask is the principal one, representing the ‘mother spirit’ of the tribe, in the dances held on the occasion of the spring sowing and the autumn harvest. An eyewitness account of the autumn celebration of 1949 at the Ham village of Nok (after which the ancient terracotta culture is named) follows.

The ceremonies began with some fearsome, faceless bush spirits to frighten and warm up the populace, then the warriors danced with long obsolete shields and the hunters mimed a hunt (including a man wearing the burtu hornbill headdress and crouching on all fours); finally, a troupe of dancers representing the able-bodied young men of the tribe with abstract headpieces danced vigorously around two tall figures, the mother spirits with turreted headdresses and dressed in great tent-like painted fibre growns. They would twirl around so that the gowns filled out majestically, and every few minutes would envelop one of the young men in a motherly embrace. Thus was the benevolence of the ancestors sought for the work of the year.

UPDATE: In the next Zemanek sale another type of Koro dance crest (labeled nyamfaik) can be found: lot 257. 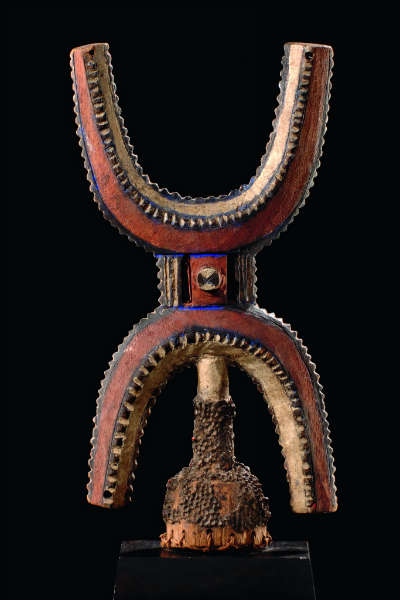