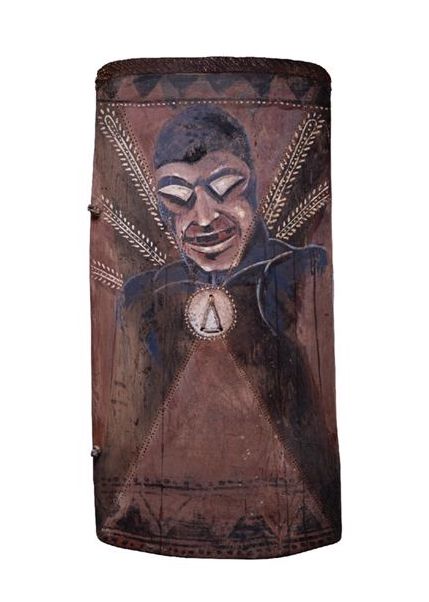 While virtually visiting the 35th annual San Francisco Tribal and Textile Art online show last week, I was delighted to learn about the publication of a new book on the super cool ‘phantom’ shield of the New Guinea Highlands. Published by art dealers Chris Boylan of Sydney, and Jessica Lindsay Phillips of Toronto, this publication contains several essays on the subject, and a catalog section illustrating 105 examples from public and private collections. I discussed these amazing shields already on this blog in 2014, see that post here. You can order the new book online here, below the blurb:

In the second half of the twentieth century, an artistic tradition arose in the Wahgi Valley of the highlands of Papua New Guinea of painting traditional war shields with the image of the comic book superhero The Phantom. This derived from some seemingly inexplicable intersection of the age-old bellicose traditions of one of the most culturally remote areas of the world and twentieth-century comic book illustration, if not pop art — a phenomenon that art historian N. F. Karlins has referred to as pop tribal. The frequent text in English or in Tok Pisin on other examples — man ino save dai (man who cannot die) or man bilong pait (man of war) — only adds to the multicultural depth. Though these appear to be curiously syncretic objects to the Western eye, to the people of the Wahgi Valley they held deep meaning to the martial power of moral rectitude and the guidance of ancestral spirits.