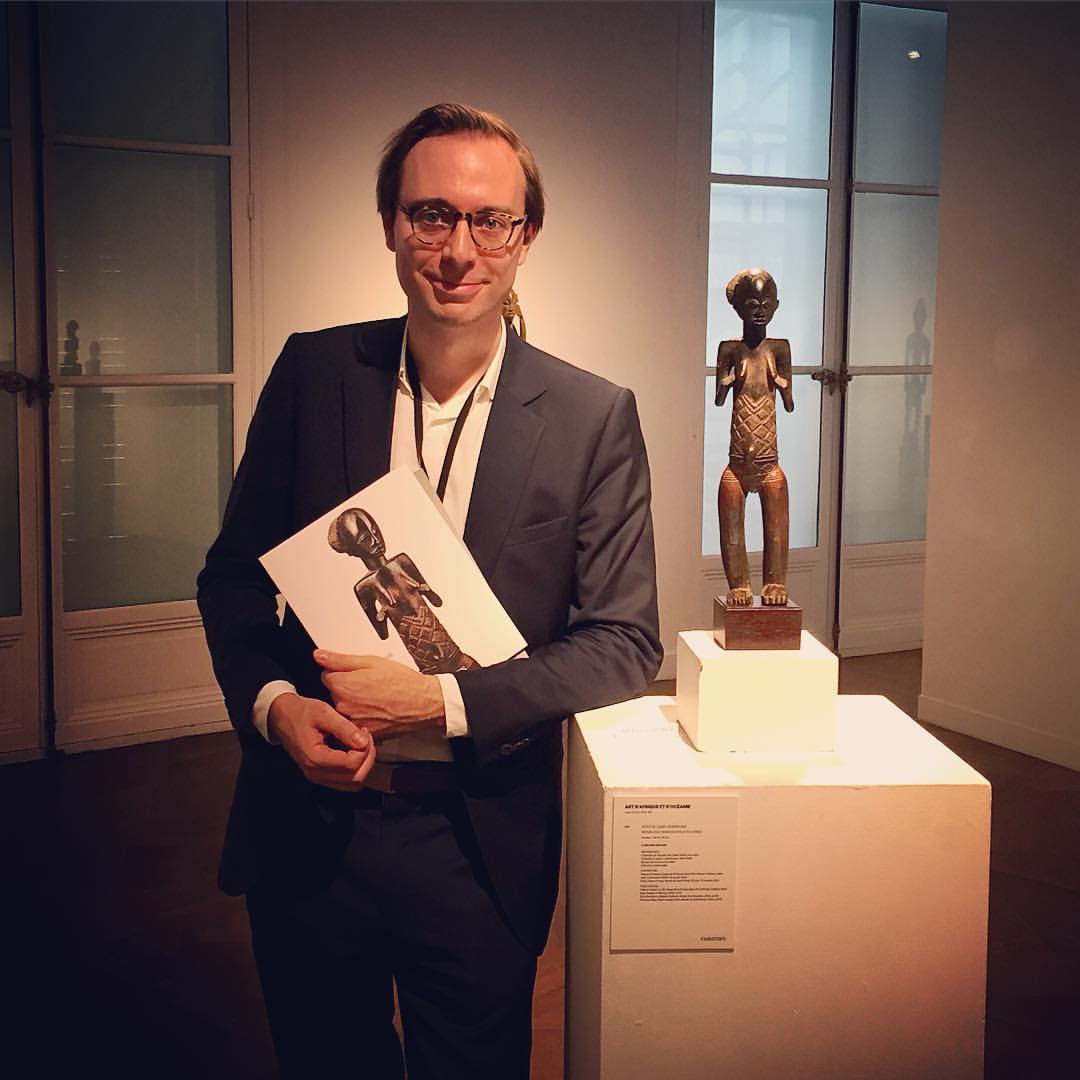 My apologies for the radio silence on the blog these last weeks; I was totally occupied with my first two sales at Christie’s Paris. If you are in the neighborhood, please do come say hello to me and my beautiful cover girl. There are only four days left to admire our wonderful selection of African, Oceanic and North-American art:

The sale of the Jacqueline Loudmer collection (info) is on Thursday 23 June and starts at 3PM, it is immediately followed by our various owners sale. As there are no reserves for the Loudmer collection (everything must go!), it will in all likelihood take a bit longer than on average, so our second sale is expected to start around 7PM. Don’t hesitate to reserve a telephone line, leave an absentee bid, bid online or just be there. You know where to find me if I can be of any assistance.

One often hears the claim that all major African works of art are known by now. But we Belgians (and the French too of course) know better. Every now and then something major pops out of nowhere, and today was such a day again. The small Brussels auction house Beguinage sold a previously unknown Mangbetu harp with an anthropomorphic column for a small fortune: it was hammered down for € 300,000 (so ca. € 360,000 with costs), selling to a French dealer (a Belgian colleague being the underbidder). Once again a clear prove that it doesn’t matter how small or obscure the sale is, if it’s good it gets noticed. Note that is has been a while since I posted about sleepers at auction..

Coming back to this harp, Georg August Schweinfurth gave a beautiful description about the importance of music in the local daily life when he visited the Zande and Mangbetu region between 1867 and 1871:

‘Apart from the special characteristics that distinguish them, more or less pronounced marks of race that pick out the different groups of the human family, the Niam-Niams are men of the same nature as others; they have the same passions, the same joys, the same pains as us. I have exchanged any number of jokes with them, I have taken part in their childish games, accompanied by the sound of their drums or mandolins, and I have found in them the same gaiety and verve found elsewhere.’ (“Au Coeur de l’Afrique. Trois ans de voyages et d’aventures dans les régions inexplorées de L’Afrique Centrale (1868-1871)”, Le Tour Du Monde, Nouveau Journal des Voyages, Vol. 28, 1874: p. 210)

‘But the Niam-Niamshave other pleasures; they have an instinctive love of art, and owe to it more elevated pleasures. Passionate about music, they extract from their mandolins sounds which resonate in the deepest fibers of their being and which thrown them into genuine intoxication. The concerts they offer themselves are of unimaginable lengths. Piaggia has said that a Niam- Niam would play his instrument for twenty-four hours without leaving it for a second, forgetting to eat or drink; and even though I know well this people’s appetite, I believe Piaggia was right. Their favorite instrument is related at once to the harp and mandolin. It resembles the former by the disposition of its strings and the latter by the form of the body. Built precisely according to the laws of acoustics, the soundboard has two openings. The strings, solidly held by pegs, are sometimes made of vegetable fibers, sometimes of giraffe tail-hair. As for the music played on these mandolins, it is highly monotonous; it would be difficult to discern in it the slightest semblance of melody. It is never more than an accompaniment to a recitation, sung in a plaintive (even whining) tone, and of a decidedly nasal timbre. I have many times seen friends going arm in arm playing this way, beating time with their heads, and plunging each other into a profound ecstasy.’ (op. cit., 1874: pp. 222-223)

UPDATE: Amyas Naegele was kind enough to share this short vintage recording of this type of harp: 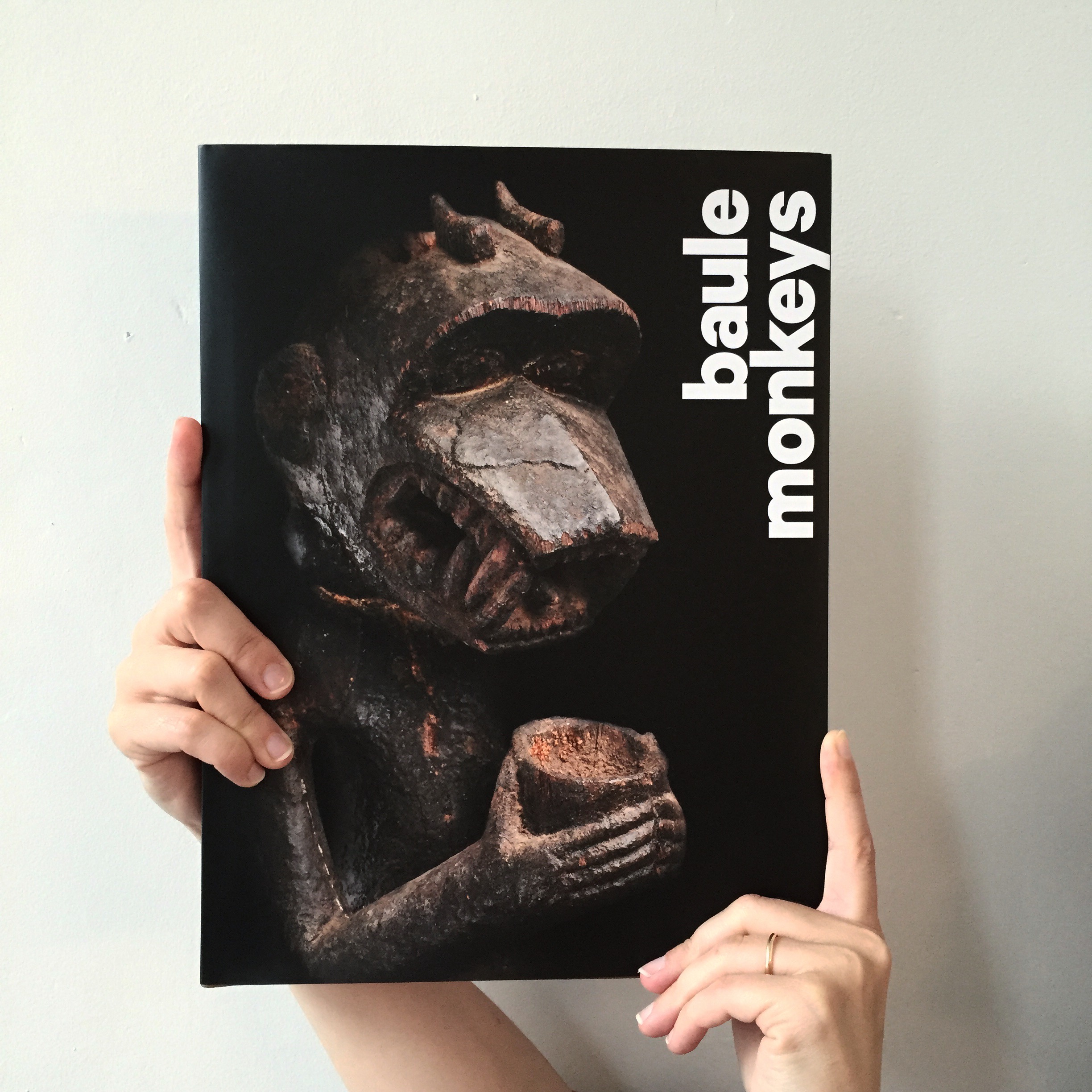 It’s time to go bananas! After 2,5 years of hard work, I’m proud to finally announce the launch of my second book: “Baule Monkeys”. My new, beautiful baby has 118 illustrations and counts 192 pages (with 25 chapters divided into four sections and 408 must-read footnotes); there’s also a French version. The seeds for this book go back a long time: about ten years ago, I encountered a Baule monkey figure from Ivory Coast for the first time during a visit to Bruneaf in Brussels’ Sablon quarter. I was utterly amazed by this bowl-bearing figure and the encounter with this statue was one of the very first times that an African art object really grasped the novice I then was. The opportunity to explore these enigmatic figures would come only years later. The Africarium Collection (which I at that time had been co-curating for a while) in June 2013 acquired the incredible cross-legged bowl-bearer illustrated on the front cover. This purchase would turn out to the catalyst to this book. The Africarium had already assembled an important group of monkey figures at the time, and this acquisition justified to dedicate these figures to the first monograph on the subject. Sharing my passion for them, Jean-Louis Danis, Africarium’s founder, agreed, and so we came to write this book.

“Baule Monkeys” wishes to explores the many aspects of these fear-inducing sculptures far from the traditional art canon of the well-known delicate Baule masks and figures. The book explores the creation, usage and morphology of the bowlbearers, and sheds light on the cultural and ritual context in which they operated. There’s also a general chapter on monkeys in African art. Through extensive research, “Baule Monkeys” combines new and fascinating discoveries with all earlier research on the subject. It as well includes several unpublished field-photos from Susan M. Vogel (who also wrote the foreword). The book focuses on fifteen examples from the Africarium Collection and a further forty monkey figures from public and private collections all presented in beautifully detailed full page spreads.

“Baule Monkeys” (and its French version “Singes Baule”) are published by Mercator Fonds – you can order it on their website here – and if you scroll down you can also find a small preview of the inside.

This Thursday (9 June), I’ll be signing the book at Vasco Books in Brussels (who also have the book in stock) from 3 to 5PM – I hope to see you there!

ps there’s also a private event in Brussels on Friday (contact me to get on the guest list).