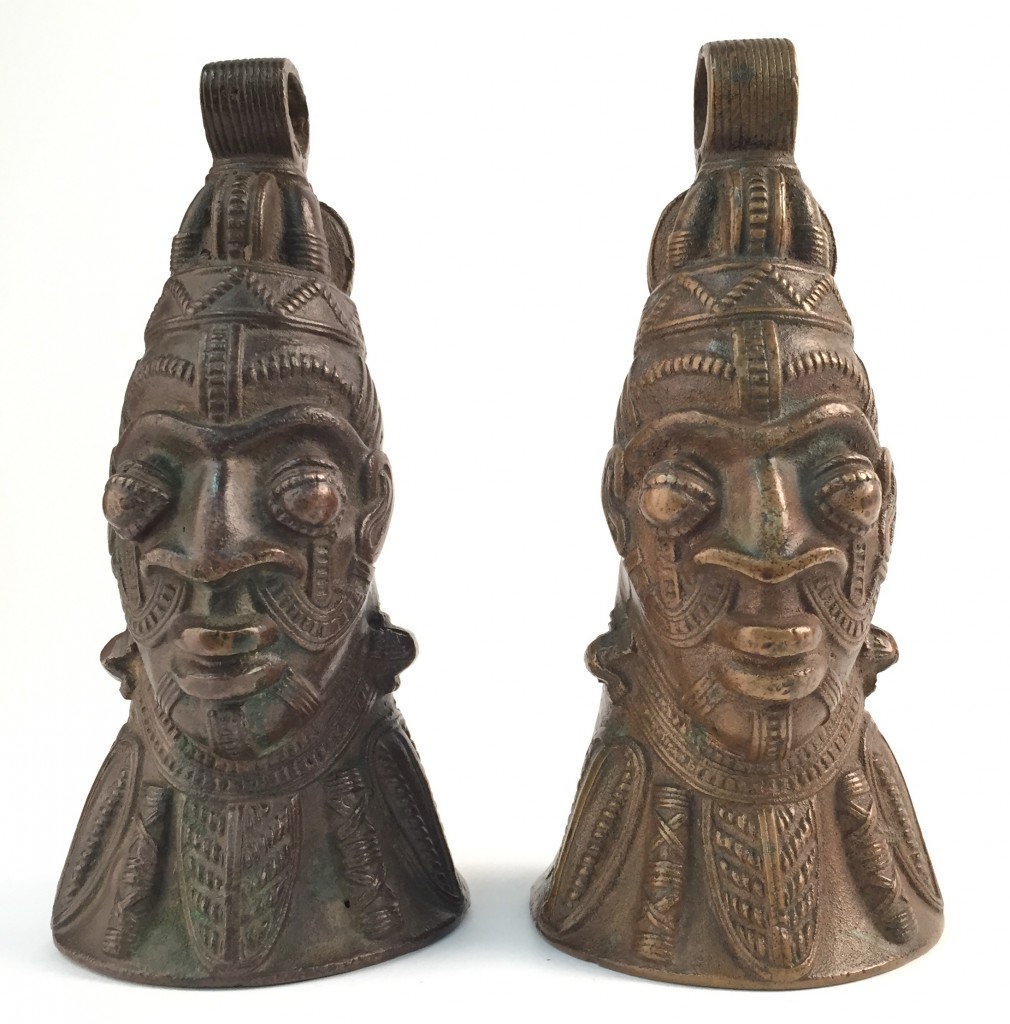 Above two conical bells that depict human heads in a style that is generally identified as the ‘Lower Niger Bronze Industry’ (southern Nigeria). It may come as a surprise, but these were not made in Africa: identical in form and size (but not in alloy), they were cast from a mold in the UK. These bells can be identified by a seam where the two halves have been attached (as opposed to the seamless lost-wax method traditionally used in Nigeria).

In Where Gods and Mortals Meet – Continuity and Renewal in Urhobo art, Perkins Foss writes about these so-called ‘Birmingham Bells’ (p. 51):

John Picton recalls that he and William Fagg saw ‘bells with a stamped job number on the back’ at the British Museum in the 1970s, and that ‘unlike the regular Lower Niger River bells they were cast in piece molds, as evidenced by the seams along each side from top to bottom.

Fagg’s hypothesis was that enterprising English District Officer or trader might have seen such a bell on a Nigerian shrine and taken it to a UK foundry (Birmingham is only a suggestion of where they might have been made) to produce a series, then to test their sales-worthiness in the lower Niger region.

Presumably these replicas were made for sale or trade or as gifts in what is now southern Nigeria around 1900. Examples have later been documented in rituals among the Urhobo, Igbo and other groups, so some of them did end up on a shrine – and thus can in way be deemed ‘authentic’. 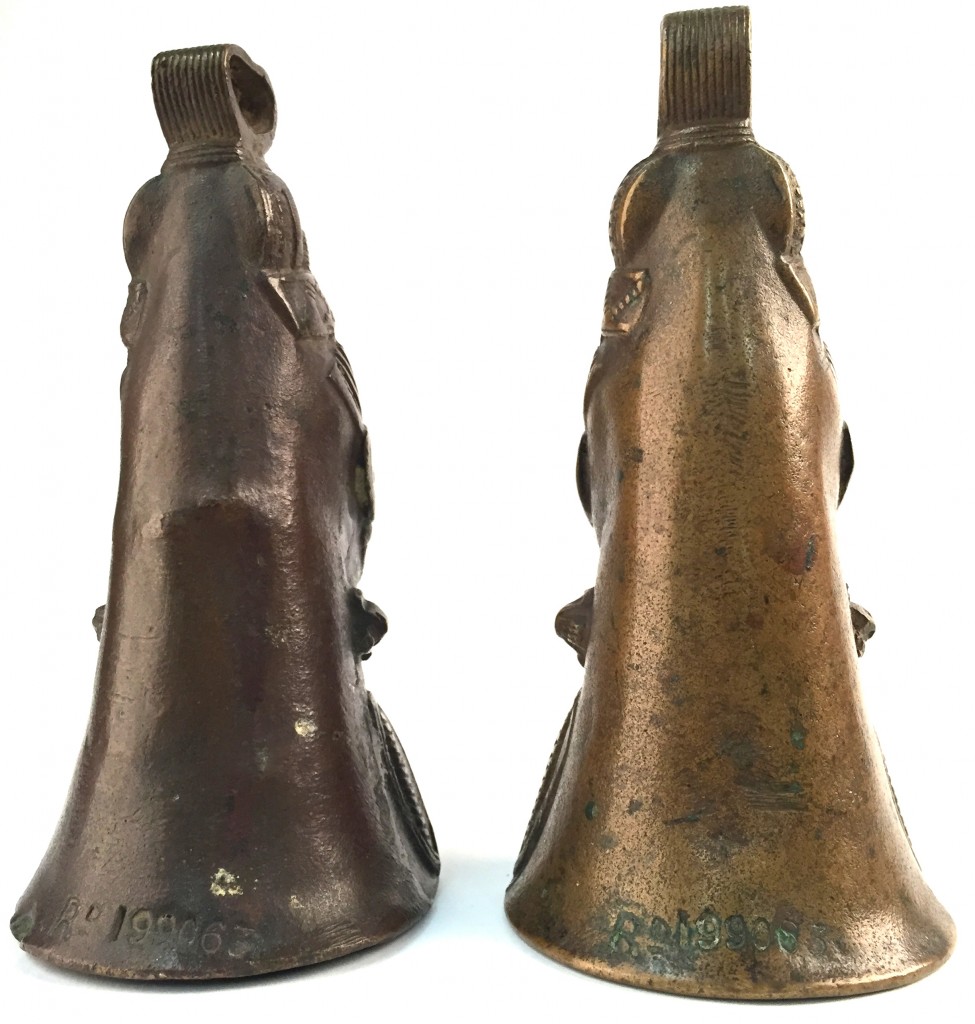 These bells always have a stamped number on the lower back – you can zoom in by clicking on the above picture; it starts with ‘R’, followed by 199063. They weigh more than twice as much as the thinly cast authentic bells; made at a time when copper was still scarce. A couple of dozen of them are known and one of them even ended up in the collection of the Metropolitan (info, correctly listed as ‘made in England’). Christie’s even sold one in 2006 for € 3,360 (info). The present whereabouts of the original bell remain a mystery, but the Dallas Museum of Art holds one that is similar in style (info); as does the Smithsonian (here). The function of these bells remains unknown, but the imagery of the (abstract) snakes issuing from the nostrils can be associated with the Edo of the Benin Kingdom, the Yoruba, the Igbo and other groups in the region. Don’t hesitate to get in touch if you would have more information about them. 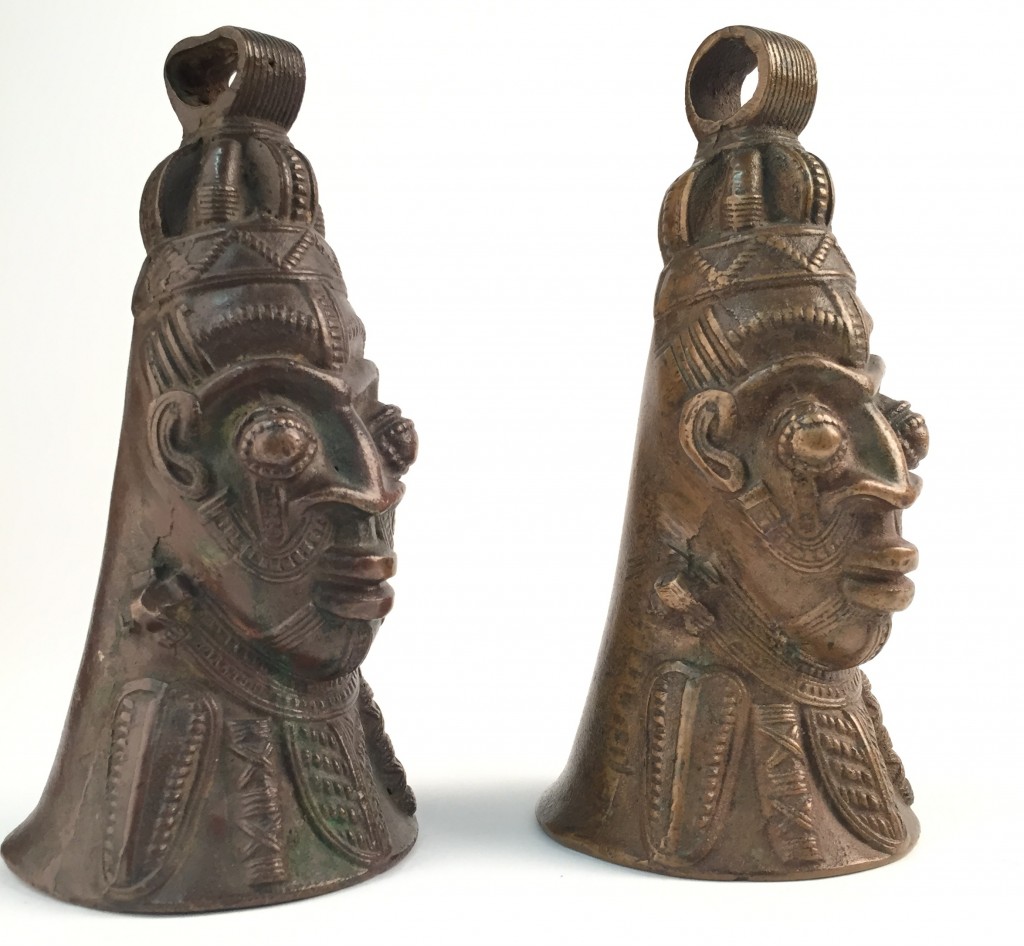