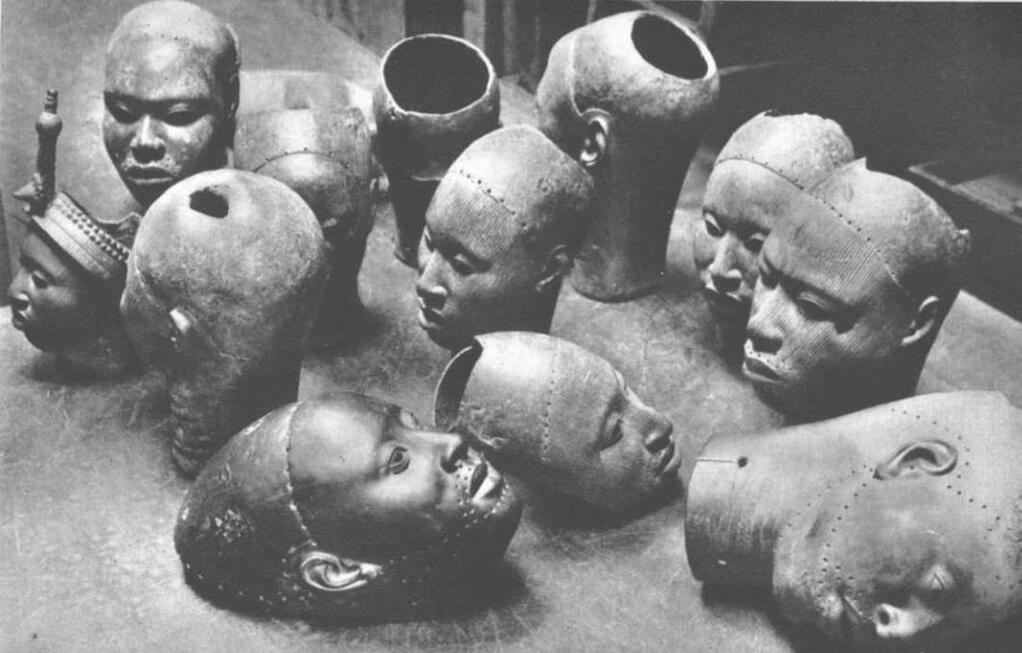 In January 1938, two feet below the ground of the Wunmonije Compound in Ife, a cache of bronze heads was uncovered while a foundation for a house was being dug. It would become one of the most important chance finds in the history of African art. Unfortunately no photos of the excavations exist. Shown above are some of the heads unpacked at the British Museum, where the Ooni had sent them in 1948. It’s quite a remarkable scene to see such an important part of Nigeria’s art history placed arbitrary on that table.

The Wunmonije compound, then just behind the palace of the Ooni of Ife, formerly was located within the enclosing palace wall. While clearing away the topsoil the workmen had struck metal and further digging revealed a group of cast heads. Thirteen life-size heads and a half-lifesize half figure were unearthed. Soon after, the same site yielded additional finds of five more works: a life-size head, three smaller heads, and a torso. The identification and function of these heads remain uncertain. It remains a mystery why this cache was ever buried; possibly this hoard once formed part of a royal altar.

Most of the objects found in the Wunmonije Compound ended up in the National Museum of Ife, but a few pieces left Nigeria. One is now in the collections of the British Museum – the head far left on the above picture. It was purchased in Ife by Mr. Bates, then editor of the Nigerian Daily Times and was subsequently acquired by Sir (later Lord) Kenneth Clark, Director of the National Gallery, acting on behalf of the National Art Collections Fund, which donated it to the British Museum in 1939. Two heads that were purchased by William Bascom (a research student from Northwestern University, Illiniois, who was based in Ife at the time) in 1938 were later returned to Nigeria as a gift in 1950 – a story documented in an article by Simon Ottenberg (Further Light on W.R. Bascom and the Ife Bronzes, in Africa, Vol. 64, No. 4, 1994: pp. 561-568).