Opening in December 2015, the Louvre Abu Dhabi will be the first universal museum in the Arab world. The museum will present all civilizations and cultures, and – unlike the Paris Louvre –  modern and contemporary art will also be exhibited. Several French museums (such as the Louvre, Musée Versailles, the Bibliothèque Nationale de France, the Musée Guimet, the Musée d’Orsay, the Centre Pompidou, and the Musée du Quai Branly) will be loaning works for the permanent galleries and exhibitions during the first ten years.

In the meantime the Louvre Abu Dhabi has been discretely building a collection of its own; you can see a list of some of these works here – among others a stool by Martin Legrain (bought from the collection of Yves Saint Laurent for € 457,000), which has a very familiar shape (see below). A preview exhibition of its latest acquisitions, Birth of a Museum, is currently on view at the Louvre in Paris. The idea is to show the commitment of the government of Abu Dhabi to acquire works of art for their permanent public collection. More than 160 of its finest masterpieces will be on view until July 28th. The online presentation of the collection (here) features one object from sub-Sahara Africa: a Dogon-Soninke figure from Mali (illustrated above). This 13th century statue was bought from a private collector from NY who had acquired it during Sotheby’s sale of the Chaim Gross collection in 2009. Estimated $ 400,000-600,000, it was sold for $ 530,000 (info). Clearly the quality level of the African art in the collection will be extremely high. As everybody, I’m of course very curious about their other acquisitions.. 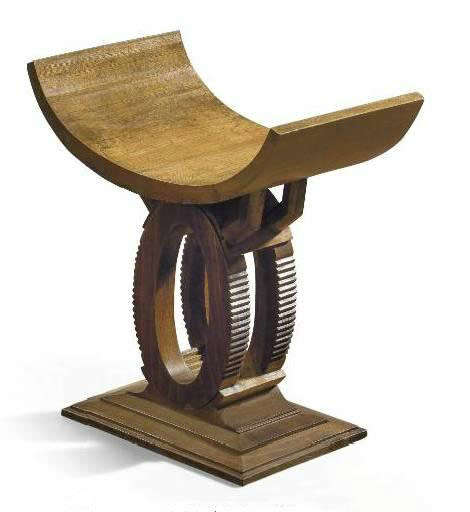