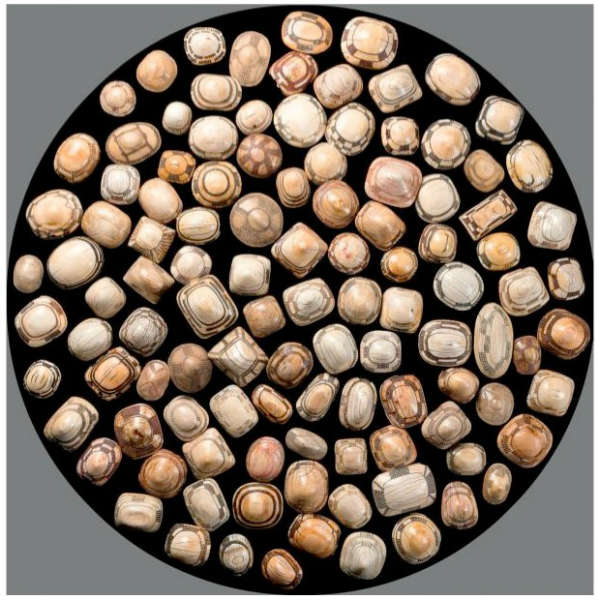 An auction find. This wonderful composition of 110 Ovambo clasp-buttons from Namibia will be sold in Paris on 6 December (more info here). Tom Phillips wrote about these ornaments in Africa – the Art of a Continent (London, 2004: pp. 228-229):

Many Ovambo ivory clasp-buttons have recently appeared on the European and American markets, where they have been without exception shown as individual objects rather than in any social context. They are a feature of women’s prestige ceremonial dress in the area of Namibia on the Angolan border and among the Kwanyama in Angola itself. They are perforated at the back in the manner of a toggle to admit leather thongs which bind them to belts or strands of beads. Early examples are found in conjunction with shell ornaments. In a Windhoek collection I have seen a complete harness of leather feathering about 25 omakipa. The vocabulary of form is wide-ranging from narrow boat shapes through square pyramid to the more usual domed form sometimes culminating in a raised nipple in evident imitation of a breast. The are usually made of elephant ivory softened by burial before working into the desired shape. Most are etched with conventional patterns of cross-hatching, though early examples can show more invention and less rigid formats. The etched marks are heightened by rubbing in various plant juices including one of a virulent crimson (sometimes almost purple). Some smaller omakipa are made from rhinoceros ivory while more recently bone has been used and even wood. They are commissioned as gifts to the future bride by the groom. After marriage he will continue to add to his wife’s collection which she wears on feast days to reflect his wealth. A full regalia would include loose straps also bearing these ivory clasps that swing freely in the dance. Ironically a number of omakipa have recently found their way back to the world of female finery, made up as very expensive belts by a fashionable designer.

They are of course very decorative. Illustrated above, another example of a recontextualisation of a large group of omakipa.