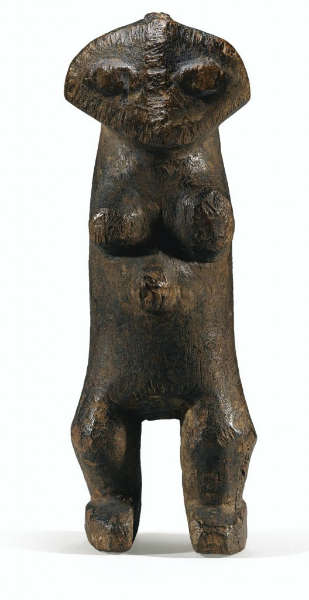 With a total result of € 3,2 million (only taking in consideration the African art and including the buyer’s premium) against a combined low and high estimate of € 2,1 & € 3 million, Sotheby’s Paris African art sale did very well. From the 72 African lots, 47 (or 65 %) were sold, that’s 5% more than Christie’s yesterday. Though Sotheby’s thus roughly sold the same percentage objects as Christie’s, the difference in quality (and value) was of course quite obvious. 7 lots were sold under the low estimate, 22 between the low and high estimate and 18 above the high estimate. Note that excluding the premium, a lot more items would be listed as sold under the low estimate – after all, these estimates are based on the hammer price (as explained in my previous post). 25 objects (35%) failed to find a buyer. Again, increasing number of objects are selling below their estimates, or not selling at all. Two African lots were withdrawn: the legged Dan stool (lot 38) and the seated Teke figure (lot 96).

The top lot was the Fang figure (est. € 500K-700K), which sold at € 1,44 million (incl. premium) – almost as much as the whole Christie’s auction the previous day. Another important object, the Guillaume Kota-Shamaye reliquary figure performed as expected at € 530K (est. € 150K-200K). In 1965 it was sold at auction for FF 9K, which after inflation and conversion is € 11,5K now – a perfect example how the prices of African art (at least the top segment) have sky-rocketed.

A curious suprise was the Fon recade, estimated already quite high at € 4K-6K, it sold for € 16K. Bidding on the anthromorphic Dan spoon (est. € 70K-100K) started at the low reserve price of € 28K, but even then failed to attract a bid. The previously discussed Luluwa figure (lot 87) not suprisingly also failed to sell.

A personal favourite was the ivory St. Anthony, selling at € 70K (est. € 30K-40K); it doesn’t get better than this. On the other hand, the Guro zamble mask didn’t even attract a single bid at € 4,5K – notwithstanding that especially in profile this was a wonderful mask. The sale’s bargain was a powerful, small Zande figure, which sold for a mere € 24K. Personally, I thought it was the winner of the sale. During the preview, the 19,5 cm figure was, even at a 10 meter distance, still radiating power. Published by Burssens and collected between 1925 and 1940, this ancient statue definitely deserved more.