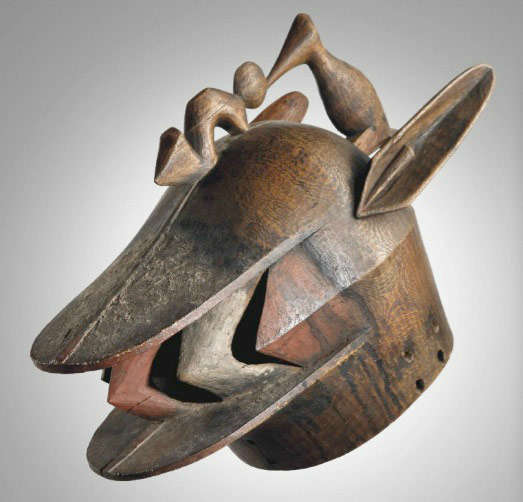 As the following statistics clearly illustrate, today’s sale at Christie’s Paris (info) was anything but a success. While the combined low estimate was € 1,9 million, the sale made only € 1,3 million, far beneath the total high estimate of € 3 million – counting only the African art and excluding the buyer’s premium. Only 53 or 60% of the African objects were sold. 24 lots sold under the low estimate (that’s 45% of the sold lots), 16 between the low and high estimate and only 13 above expectations. From the 88 African art lots, one lot was withdrawn: the Luba staff (lot 105). From the remaining 87 objects, 34 failed to sell – that’s almost 40 %. Three of the more important objects that didn’t sell were the ivory Yoruba equestrian figure (lot 43) (est. € 50K-70K), the black Punu mask (est. € 100K-150K) and the smiling Fang head from Arman (est. € 200K-300K).

Though not numerous, there were some suprises: a Bamana antelope headdress sold for € 17K, with an estimate of € 4K-6K. A Kuba cup from the Schwob collection (ex Jeanne Walschot) was hammered down at € 16K (est. € 3K-5K). Though the face was slightly tilted, the cup not circular at the top and obviously not in a pristine condition, it showed great age and decades of usage. A Luba figure from a known hand tripled its lowest estimate, selling for € 36K. Selling well above the expectations, and justly, was a compelling Vili figure (lot 110) – esimated € 15K to € 20K, it was sold for € 90K. Most of the people I talked with agreed this was a great figure. The low estimate thus definitely attracted some additional interest, generating in this nice result.

From my personal favourite objects the stylized Senufo helmet mask exchanged hands for only € 12K and a Ligbi mask, which I consider to be one of the best around, failed to attract a single bid at € 20K – too unknown maybe; I don’t know.