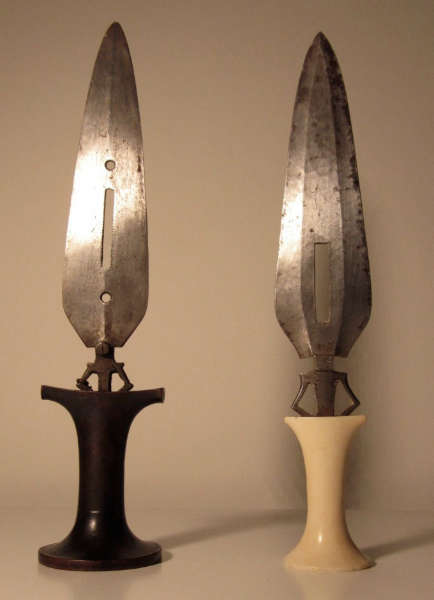 Image: BC. Left dagger courtesy of the Grace Collection of African Art.

Mangbetu daggers (sape or sapi) were used by both men and women with or without sheath. Those without a scabbard were generally kept near the house and used by women though men may have worn them in the belt. As a rule men carried these knives in nearly sewn scabbards of elephant hair, pigskin, or antelope-skin. The men wore these knives on their back hanging down from their belt, the handle downward, the point upward. The knife was retained in his scabbard through the pressure created by the tin liners of the sheath. Herbert Lang’s field notes confirm that in his time many of these daggers were created to demonstrate wealth and status. All important men wore these beautifully worked knives, that were both utilitarian items and prestigious ornaments.

Above two knives (one with a wooden handle, one with an ivory handle), temporarily reunited for this picture, belonging to a rare type with the lower part of the blade in the form of an abstract anthropomorphic figure. 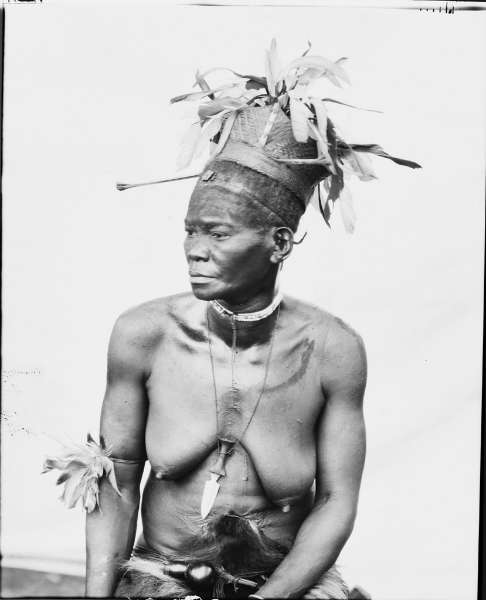 Ayana, an Abaramba woman. Notice the small knife she is wearing around the neck. Photographed by Herbert Lang in Poko, August 1913. (Image courtesy of the American Museum of Natural History, #225094)